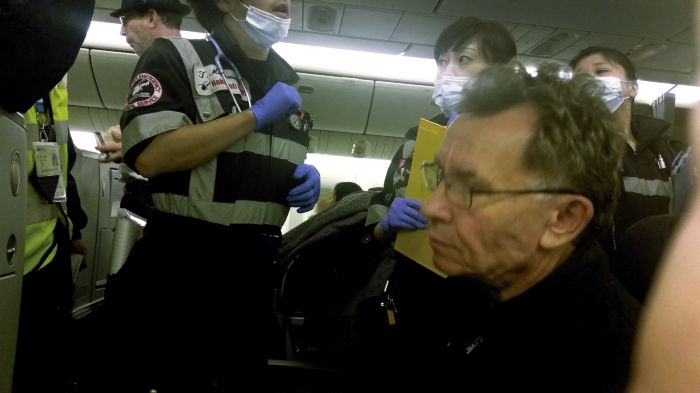 Erin Cherry took this photo of her seatmate being checked out by medical personnel. Submitted photo.

Erin Henrickson Cherry had a window seat — Seat 12A — on her trip back to the States Tuesday from Seoul, South Korea. Flight attendants had just started serving food when the turbulence hit.

A 2003 East Rowan High graduate now living in Huntsville, Ala., Cherry remembers it as a little bump and the sensation of falling, followed by an even bigger jolt and everything not fastened down flying toward the ceiling.

Next to her, Erin’s seatmate was holding onto the arm of a flight attendant who had stopped the food cart next to them. He literally was keeping the attendant from flying away.

All the glasses and plates — now gone from the drop-down seat trays — were breaking as they hit the top of the cabin, the walls and floor.  Cherry tried to collect some of the shattered glass in a napkin and blanket as her seat-mate kept clutching the attendant.

Erin’s salad had splattered above her, then showered her in lettuce. Salad dressing dripped on her from the ceiling.

Other passengers who had been drinking wine, beer and water weren’t as lucky. They were drenched.

Erin recalled a man in a white shirt being covered in so much red wine he appeared to have been bloodied in battle.

“I had chugged my beer,” Erin said in a telephone interview Thursday. She was able to laugh about it now.

Cherry, 28, and the others on American Airlines Flight 280 later would describe the flight as their scariest flying experience ever. After the Boeing 777 landed on an emergency diversion to Tokyo, four passengers and a crew member were taken to a hospital for treatment.

The plane’s harrowing flight made national news, especially as some of the passengers provided media with cellphone video and photographs of their ride and the damage it caused inside the cabin. Images Erin had captured made ABC News’ nightly report.

The turbulence and the 226 passengers’ fears lasted about an hour.

“It was a really bad storm,” Cherry said. “We just had to sit through it.”

At the worst points, people were screaming, praying in many different languages and even saying goodbye to their families. Cherry said she personally wished she could have reached her husband, Jason, who was on a flight to Missouri at the same time.

Erin said she was fortunate she still had her seatbelt fastened, unlike many others. She credited the seatbelt and dinner tray for keeping her from being thrown from her seat. As her seatmate was holding onto the flight attendant, Erin said she studied the attendant’s face, trying to judge just how serious things were.

“It was quite an alarming scene,” Erin said. “It was very scary.”

Another flight attendant hit her head on an exit sign. Cherry saw the damaged sign much later. Serving carts were tossed over, while cellphones and laptops were thrown everywhere. A mother and her baby were trapped in the bathroom throughout the turbulence.

Cherry said something that concerned her and other passengers was not receiving any information from the pilots while the plane was going through the storm. She spent most of her time watching the GPS monitor in front of her, showing the plane’s altitude and speed.

Counter to what many news sites reported, Cherry said the plane already was halfway between South Korea and Hawaii when the pilots decided to turn back and head for Tokyo.

The original flight was supposed to go from Seoul to Dallas-Fort Worth, with a stop in Vancouver.

Cherry had been attending a program committee meeting in Seoul for ACM CHI. She has a Ph.d. from the University of North Carolina at Charlotte and is a research scientist for Northrup Grumman in Huntsville.

Cherry still has close ties to Rowan County, where her mother, Renee Morrison McDaniel, and stepfather Chad McDaniel live. Her father is Paul Henrickson, and her grandparents are Pat and Robert Morrison and Maxine and Jerry McDaniel.

With the back-tracking to Tokyo, Cherry estimated she had been in the air close to six hours. As the turbulence eased, many of the passengers left their seats to assist the attendants in helping the injured and cleaning up some of the mess, especially the glass.

“The airline was really great about how they handled the arrival of more than 200 people,” Cherry said of American Airlines personnel waiting on the plane’s landing in Tokyo. All the shuttles, hotel rooms and meal coupons were arranged. Customs documents were pre-stamped.

“Once we arrived, it was really smooth,” Cherry said.

American Airlines provided a special flight with a new jet the next day. This second flight was renamed to 9280.

“I was still very nervous about it,” Cherry said of getting on a plane again. “Psychologically, it just bothered me.”

She and other passengers remarked that if they could have, they would have preferred getting on a bus to travel home.

As a reward for his heroics on the previous flight, Erin’s seatmate was given a seat in first-class.

The second flight went without mishap, though there was some turbulence. Over the 12-hour flight to Dallas, Cherry said, she slept only three hours.

Cherry heard that Flight 280’s plane suffered damage in the storm and, on its arrival in Tokyo, was taken off line. The new American Airlines crew for the replacement flight was quite cheery, maybe to a fault, considering what the passengers had been through a day earlier.

Erin said she kept thinking to herself, “Please, stop being so happy,”

Santa just one of the stars at Autumn Care…