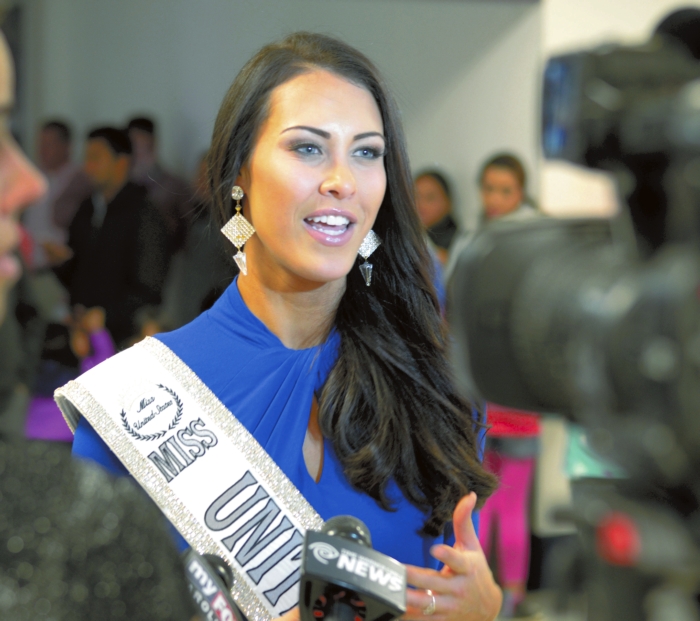 Hugh Fisher/For the Salisbury Post Elizabeth Safrit, named Miss World Americas last week at the Miss World competition in London, speaks to reporters on her return to the U.S. in Charlotte on Thursday evening. She will spend the coming year traveling and representing the Miss World organization, and pursuing a career in broadcasting.

CHARLOTTE – As the TV cameras rolled at Charlotte-Douglas International Airport, a small crowd of people craned their heads to see the woman coming down the ramp.

Elizabeth Safrit, who was crowned Miss World Americas on Sunday in London, smiled brightly at the impromptu crowd of well-wishers as she arrived Thursday evening.

“It feels great to be home!” said Safrit, 22, who was crowned Miss United States in Washington, D.C. on July 6.

A Kannapolis native, Safrit started competing in pageants in 2011, the year after she graduated from A.L. Brown High School.

She graduated in May from the University of South Carolina with a degree in political science, and told reporters she plans to pursue a career in broadcasting.

But first, she’s got several months as Miss United States, and a year of representing North and South America for the Miss World organization.

Even as she returned home for the first time in a month, at the end of an eight-hour flight across the Atlantic, Safrit took time to pose with kids and grown-ups in the airport. As she posed for a picture with Abbey Worsdell, of South Carolina, Safrit asked the girl some questions and gave a friendly smile to all.

Watching her daughter give interviews, Lynne Scott Safrit said the competition had been an amazing journey.

“It’s exciting, seeing her pose for pictures with the kids,” Lynne Scott Safrit said, while nearby, her daughter slipped into the new role she’ll have for the year ahead: encouraging and empowering young people.

“After a long time away, you feel so relieved to be back,” Elizabeth said.

First on her agenda: Say hi to her dogs, who were waiting at home.

And then, Elizabeth said, “enjoy some time with my family for the holidays.” Prepping for the competition meant missing Thanksgiving, but she said she’s glad to be home for Christmas.

Elizabeth said she was very nervous as the names of the top 25 Miss World finalists were called.

Hers was the very last name on the list.

The Miss World competition isn’t what most people think of when they think of a “beauty pageant.”

Fitness, communication skills and knowledge are also tested. In a recent interview, Safrit told the Post about the nutritional diet and training regimen she’d been following.

Part of her London experience included the opportunity to take part in a debate at Oxford University as part of a Miss World team.

“I felt so honored to stand where Jimmy Carter, Ronald Reagan and Mother Teresa had stood,” Safrit said.

For those who might think pageants are all the same, Safrit had a friendly challenge: Watch the recording of this year’s Miss World competition, in which some 120 young women took part.

“It tests every skill a woman who wants to be successful must have,” Safrit said.

In the months ahead, in addition to her travel on behalf of the Miss World organization, Safrit will consider her future career in broadcasting.

One option, she said, is sideline reporting. “I’m a football girl!” she said, and that might be one career path.

Another option might be a role as a political correspondent, building off her interest in youth and politics, Safrit said.

No matter where life takes her, Safrit said she was proud of the honor that she’d received, and most of all, proud to represent her country.

The path that took her from Miss Kannapolis USA last year to second runner-up in the Miss World competition this year “has made me so proud to be an American,” Safrit said.