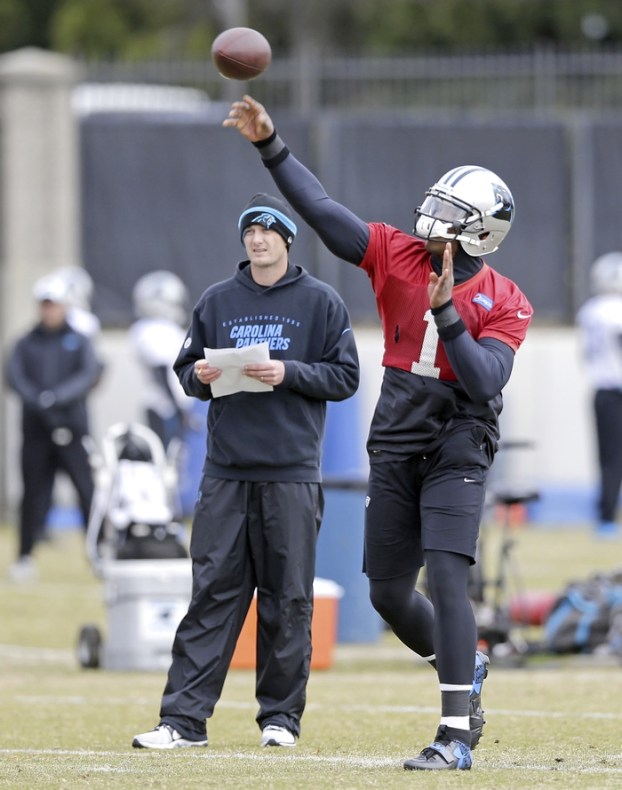 The Associated Press Carolina quarterback Cam Newton, right, throws a pass as quarterbacks coach Ken Dorsey, left, looks on during practice Thursday in Charlotte. Head coach Ron Rivera said after practice Newton will probably start Sunday when the Cleveland Browns are in town to take on the Panthers.

The team increased Newton’s workload and Rivera said the fourth-year QB seemed to handle it well. However, the coach was hesitant on naming Newton the starter in case he begins to experience soreness in his back.

“I would say he is on target” to start, Rivera said. “He had a good day and took the reps he was supposed to.”

Newton was a full participant in practice Thursday, nine days after he was involved in a two-vehicle crash that left him hospitalized for one night with two fractures in his lower back.

He declared himself pain-free after the workout.

“If I can play, we all know I want to play,” Newton said. “But at the end of the day I won’t jeopardize what we have the opportunity to do just because of my selfishness to say, ‘Oooh, I’m a tough man.'”

Unlike in past weeks when Newton was bothered by injuries and came right out and said definitely he wanted to play, the two-time Pro Bowler was more reserved about his playing status.

He repeatedly said he didn’t want to be a distraction.

Derek Anderson started last week against Tampa Bay and led the Panthers to a 19-17 win. Anderson is 2-0 as the starter, but both wins have come against the 2-11 Buccaneers.

“I’m fine either way it goes,” Newton said of Rivera’s impending decision on the starting quarterback. “I don’t want this to be a distraction. We have our hands full getting prepared for a great team in Cleveland. We aren’t worried about who will start at quarterback. I think we’re both ready.”

Rivera said Newton probably answered the question in that manner because “he probably didn’t want to put any pressure on me — and I appreciate that.”

Newton is having a down year by his own standards, throwing for a career-low 2,812 yards with 16 touchdown passes and 11 interceptions while recovering from offseason ankle surgery and fractured ribs during the preseason.

Rivera reiterated he wouldn’t risk exposing Newton to injury if he’s not ready to play.

But he said all signs point to the 25-year-old making a quicker than expected comeback.

Newton completed a 65-yard pass during practice on Thursday that Rivera called a thing of beauty. Rivera said Newton also made a leaping one-handed grab on Wednesday when tight end Greg Olsen threw a ball back to the quarterback following a play.

Rivera said Newton reported to work Thursday feeling good after trainers put him through a tough day of work on Wednesday.

“He’s looked pretty good and now we’ll see how he is” on Friday, Rivera said. “We increased his reps and did some different things with him today. They put him through a pretty rigorous workout.”

Rivera said he like to officially name a starter as soon as possible.

The Panthers (5-8-1) are a half-game behind the New Orleans Saints in the NFC South with two games remaining in the season. They can win the division with two wins and a Saints loss.