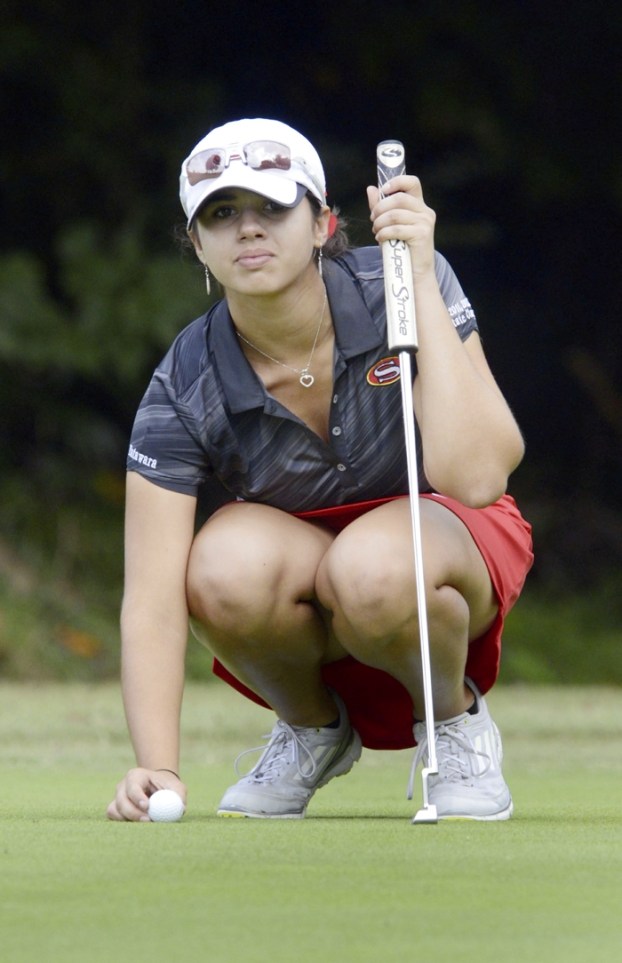 File photo by Wayne Hinshaw Salisbury's Grace Yatawara at the Rowan County girls golf championship in September. Yatawara is the girls golfer of the year.

Golf is never too far away from Salisbury’s Grace Yatawara. Yatawara is on vacation with her family in Sri Lanka. Her clubs did not make the trip with her, but she found time to make it to a golf course.
“My sister and I rented golf clubs and played on Wednesday,” she said in an email Friday. “It was so different from the (United States), but such a good experience. It’s such a privilege to get to play in a different country.”
It was another memory in a fall full of them for the Salisbury junior. Yatawara captured the Rowan County, the Central Carolina Conference, the 1A/2A Central regional and the 1A/2A state championships. Naturally, it was a no-brainer when it came to naming her The Post’s county girls golfer of the year.
“I am very pleased with my year in Salisbury golf,” Yatawara said. “I really played solid and kept my head in the game in every round.  It felt good to have everything come together during the season.”
She is joined on the All-County team by Salisbury teammate Isabella Rusher, who finished second at the county, regional and state championship tournaments. Also on the team are Carson’s Micah Furr and Addison Collins, East Rowan’s Grace Stokes, West Rowan’s Kelly Boley and Savannah Loyd, and Alexandria Bare from South Rowan.
Yatawara was nothing but consistent at the state tournament to beat her teammate on the West Course at Foxfire Golf and Resort. It was the third time in the last four years Salisbury claimed the team title and a Hornet claimed medalist honors.
There was a three-shot difference between Yatawara and Rusher after the first day. Rusher, who signed in November to play for Richmond, made a charge with a second-round 71. Yatawara shot an even-par 72 in the second round to hold off Rusher.
“Going into the state championship, I had a feeling that Isabella and I would be the ones fighting for the title,” Yatawara said. “Isabella is such a solid player and she has experience being in the winning position during states so I knew it would be a tough fight.
“During the actual tournament, I mostly focused on the team aspect because that it much more important than winning individually.  I did think Isabella would play well the second day because she has a very good game and she knows how to handle pressure situations. I knew I would have to play well in order to take the individual title.”
Yatwara, despite all of the individual and team success on the course, could not name a specific highlight or any win that stood out over the other. She said the county, conference, regional and state championships all need to be cherished.
While on her way to claiming the championship, Yatawara made the decision on where to play at the next level. She verbally committed to East Carolina. It was an easy choice to take her talents to Greenville and swing the sticks for the Pirates, the No. 61 team in the country according to GolfStat.
“East Carolina was definitely my No. 1 choice in the colleges I was looking at,” she said. “My favorite part of the school is
the coach. He has watched me since I was in 8th grade and has supported me throughout my tournaments.”