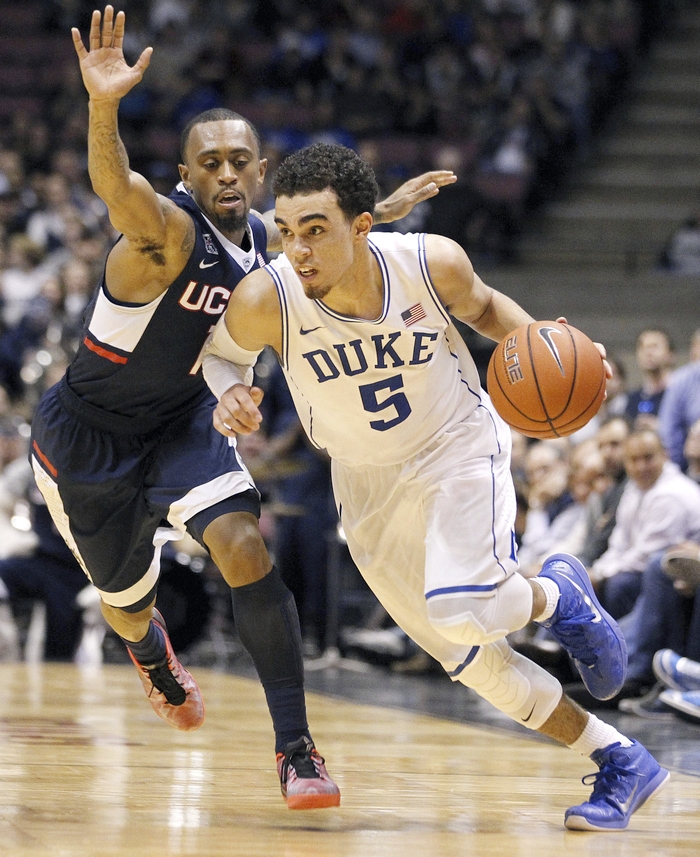 EAST RUTHERFORD, N.J. (AP) — Two possessions into the second half, Mike Krzyzewski had seen more than enough from his young and talented Duke team and let them know it in forceful terms that any young man would understand.

After hollering at his second-ranked Blue Devils to get over to the bench, Coach K asked them what was wrong and then told them to wake up, throwing in an occasional salty word.

While the tirade didn’t sink in immediately, Duke (10-0) got the message.

“We were out to lunch. I mean, we were in La-La land,” Krzyzewski said. “I had to take the timeout to get us back into it.”

Connecticut (4-4) managed to tie the game at 30 after the time out , but Duke responded with a 15-2 run and never lost the lead.

“It just shows the passion he has for the game,” Jones said. “It shows how much the game means to him. He still has that passion. We weren’t playing well and he let us know it. He still has that, depending on the situation. That’s when he gets on us. We deserved that.”

Winslow and Jahlil Okafor — the other two members of the Blue Devils’ trio of talented freshmen — added 12 points apiece. Amile Jefferson added 11 points and 13 rebounds in a game that had the feel and intensity of a NCAA tournament contest.

“UConn played a tough, physical game. It was a good experience for us,” said senior Quinn Cook, who added 10 points. “We just had more good plays than they did.”

Ryan Boatright had 22 points to lead the Huskies. Kentan Facey added 14 points and Daniel Hamilton had 10.

Duke has won all 10 of its games by at least 10 points, but this one was a lot closer being played in the Izod Center in the Meadowlands sports complex before a near sellout, pro-Huskies crowd.

Trailing 30-25 at the half, Connecticut scored the first five points and it had a chance to take the lead but Boatright missed the second of two free throws.

It was all Duke after that. The Blue Devils went on a 15-2 spurt with Winslow putting in a rebound and Jones hitting a layup for the first four points.

Connecticut made a couple of runs. It drew within 53-45 on one of Boatright’s three second-half 3-pointers, but Okafor hit two free throws.

Consecutive rebound follows by Facey got UConn within 57-51 with 3:48 to play, but Winslow hit a 3-pointer off a Jones feed and Jones added two free throws to push the lead to 62-51.

Connecticut’s last chance came when Boatright hit another 3-pointer to close to gap to 62-56 with 2:00 to go, but Winslow followed the second of two missed free throws by Okafor with a rebound layup and Duke was never threatened.

“There are games within games and there are situations where we are not able to make plays,” Connecticut coach Kevin Ollie said. “You can’t keep blaming it on youth. We have to grow up and make those game-winning plays.”

Duke: The Izod Center, formerly the Meadowlands Arena, is the Blue Devils’ home away from home in the New York City metropolitan area. Duke is now 21-1 in the building and has won 14 straight.

Connecticut: Huskies sophomore center Amida Brimah was a non-factor in the game after picking up two early fouls. He was UConn’s second-leading scorer (13.7 points) and missed his only shot late in the second half.