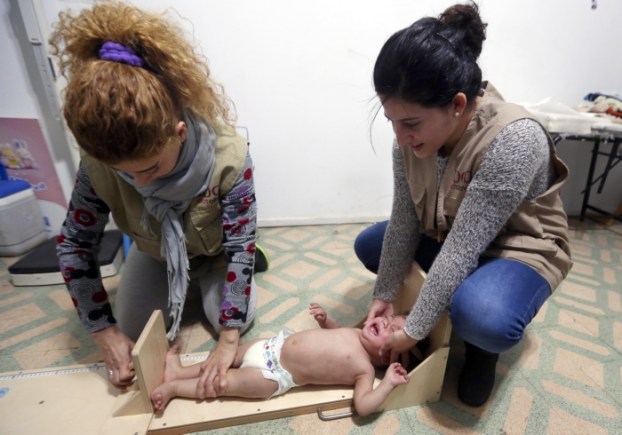 FILE - In this Tuesday, March 11, 2014 file photo, two aid workers measure 1-year-old Syrian refugee Jawad al-Abbas at a medical clinic in the town of Kab Elias in Lebanon's Bekaa Valley. Nearly 30,000 Syrian children born as refugees in Lebanon are in a legal limbo, not registered with any government, exposing them to the risk of a life of statelessness deprived of basic rights. (AP Photo/Bilal Hussein, File)

Neither Cuban nor American officials have confirmed that Rolando Sarraff Trujillo, whom Obama hailed as one of Washington’s most valuable assets, was spirited off the island.

If the U.S. concludes Pyongyang was behind the Sony hack attack, it might cut that country’s access to hard currency and declare it once more as a state sponsor of terrorism.

The government will also try to cancel the bail granted to the main suspect in the 2008 Mumbai terror attacks – a decision that called into question Pakistan’s commitment to fighting insurgents.

“All parents would feel a gut-wrenching sadness at what has happened. This is an unspeakable crime.” — says Prime Minister Tony Abbott.

5. WHAT AMERICANS THINK ABOUT DRONES

As an Associated Press-GfK poll suggests, the majority of respondents are skeptical that benefits of commercial vehicles will outweigh privacy and safety risks.

6. NEARLY 30,000 SYRIAN NEWBORNS IN LEBANON AT RISK OF STATELESSNESS

It is a problem that is replicated in nations across the Middle East where more than 3.3 million Syrians have found safe haven from the civil war in their homeland.

An influx of Chinese visitors to Washington state makes its way to high-end property markets, and observers don’t expect it to slow down any time soon.

Colorado’s top law enforcement official promises to fight for the measure known as Amendment 64 after Nebraska and Oklahoma asked the U.S. Supreme Court to declare it unconstitutional.

The finale of the “Say Yes to the Dress” TV show captures Rebekah DiMartino using crutches for balance as she tries on wedding gowns at a bridal salon.

His next step: playing himself as the new host of CBS’ “Late Show” replacing David Letterman, who exits next May.

Here’s a Christmas surprise — someone DID say snow. We have a slight chance of light snow developing tonight or... read more