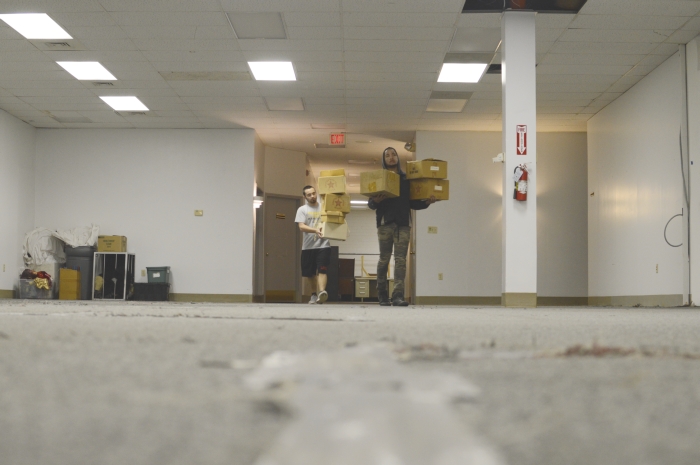 Josh Bergeron / Salisbury Post - Student workers on Wednesday help the Piedmont Players carry in some of the recently purchased merchandise from the Greensboro-based Eastern Costume Company.

Salisbury’s newest business moved from Greensboro Wednesday in two trucks that were filled to the brim.

Local theater company Piedmont Players purchased the Greensboro-based Eastern Costume Company on Tuesday and the following day began moving a small portion of the costume company’s equipment into a space in the center of downtown Salisbury.

One potential difference between the Greensboro incarnation of Eastern Costume Company and the Salisbury version is the ability to order online, Leonard said.

The Eastern Costume Company’s location will be underneath Innes Street Drug Store, with its entrance being located adjacent to the drug store’s. A stairwell would lead customers down to the space where college students and members of the Piedmont Players were moving costumes Wednesday.

Because of a lengthy staircase at the new Eastern Costume Company location, Leonard said some handicapped customers could simply pick up orders just across the street at the Piedmont Players Theater on Main Street in downtown Salisbury.

Leonard said the two truckloads of costumes brought in Wednesday were just a small portion of the overall inventory. The collection of costumes is truly massive at more than 40,000 total pieces.

Some of the reasons for purchasing the costume company at $150,000, Leonard, said, was a need for costumes, the ability to generate more income and be able to work with theater companies along the East Coast.

He said some of the previous employees of Eastern Costume Company in Greensboro would help in the transition to Salisbury.

Piedmont Players will have a short time-frame to get all of the costumes moved from Greensboro to Salisbury. The previous owner already sold the building Eastern Costume Company was located in and would have to vacate the space on Dec. 31, Leonard said.

“The idea is between now and Christmas Day we would get everything here,” he said. “It’ll just be laying on the floor and piled everywhere. Then the week after Christmas is when we’ll come in and set it up.”

“We’ve been doing shows with them since 1988,” he said. “We know most of the stuff and several of the kids doing the unload would say, ‘Oh, there’s my old costume.’ ”