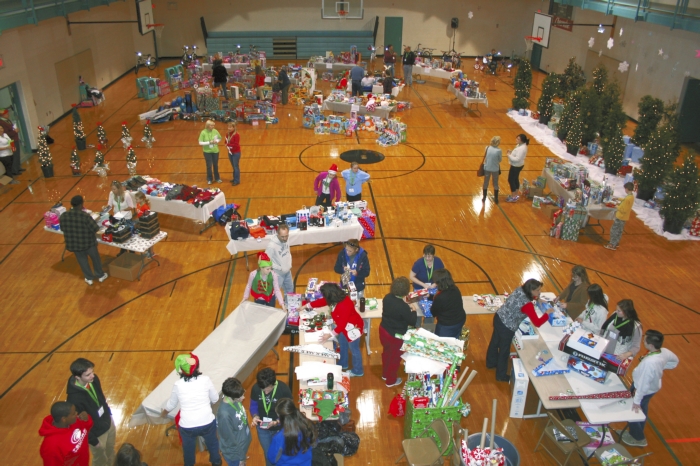 Some 60 families in the South Rowan area shopped at Christmas with Dignity on Saturday, an event where donated toys and clothing were priced at deeply discounted rates. Main Street Mission sponsored the event, and Executive Director Anne Corriher said that money raised from sales would be used to help even more families next year with a bigger store. Susan Shinn/for the Salisbury Post

LANDIS — Some 60 families in the South Rowan area — including more than 200 children — will have a very Merry Christmas this year.

On Saturday, Main Street Mission in China Grove presented its first Christmas with Dignity store at the South Rowan Y, stocked with a whole gym full of donated toys, clothing and sporting goods, all priced at pennies on the dollar.

The event, with two shopping sessions in the morning and afternoon, was also filled to the brim with more than 100 eager, smiling helpful volunteers, who did everything from gather gifts to wrap them to load them in vehicles.

It was all overwhelming for the families who received such heaping portions of love and caring from their neighbors in the community.

“I’m just gonna tell you, this is just wonderful,” said Tonya Alvarado, who shopped Saturday morning with her son, Benjamin, and nephew, Cesar Sanchez. “When I came in here, my eyes were big and my jaw just dropped down.”

Tonya said she shopped before the boys, so they wouldn’t know what they were getting — although Benjamin figured out pretty quickly he was getting a basketball goal. That’s a pretty hard gift to hide in the back of a car, after all.

One of the volunteers even gave Benjamin a basketball, which he carried throughout the morning with a grin on his face.

“I’m just happy that people would donate such stuff to help us have a great Christmas,” he said.

And donate they did. Walmart of Salisbury donated $1,000 toward the effort, and many local churches participated. First Reformed Church donated a whopping $7,000, and cash from individual donations totaled some $5,000, according to Hope Oliphant, the mission’s community outreach coordinator.

Anne Corriher, the mission’s executive director, said afterward that some $2,200 was raised from sales, which will be used to make next year’s store even bigger.

No doubt they’ll have more customers next year, as word spreads of Saturday’s successful event.

Hope said that the mission took applications in November and interviewed families to participate in the Christmas with Dignity shop. Her goal was that the mission could help 40 families, she said Saturday morning. “But we got so many donations that we were able to accept all who applied.”

Tonya said that for $42 (she went $2 over, she admitted), she came away with two big bags and two big boxes full of gifts — along with Benjamin’s basketball goal. The one he was using broke, but she plans to fix it and pass it on to Cesar, she said.

Families could also choose from among stocking stuffers and handmade Christmas ornaments. Kelly McCarty, who travels faithfully with Anne to Second Harvest Food Bank, knitted 95 colorful scarves to give away.

Outside the Y, Fallon Ritchie and her parents, Greg and Carroll Lynn, helped shoppers load their cars. Her youth group at Concordia Lutheran Church volunteered for the event, she said.

“It’s so cool to see all the happy faces,” Fallon said.

“To me, it was a little overwhelming,” Melissa said, smiling. She added that she got everything she needed.

Back in the gym, the brother-sister team of Evan and Tori Bamford quickly helped wrap gifts. They were there with friends from church, Evan said, “but we help Main Street Mission every week.”

The always effervescent Carole Brooke, whose husband, Tom, is a board member at the mission, was even more enthusiastic on Saturday.

“It’s wonderful! It’s beautiful!” said Carole, also part of the present-wrapping cadre. “Everybody’s pitching in and getting done what needs to be done. The customers are all so appreciative. The children are gonna be so happy on Christmas morning, don’t you think?”

Zoe Riggs, 11, a member of First Reformed Church, picked her way among the candy-colored packages of Razors and Barbies.

“I’ve been mainly a runner today,” Zoe said, ferrying gifts from shoppers to the wrapping tables. “This has been pretty awesome. I think it’s a great idea.”

Classic Chuck Taylor All-Star sneakers, either in black or red.