Guest column: Rebecca Aclin gets her pepper on, literally 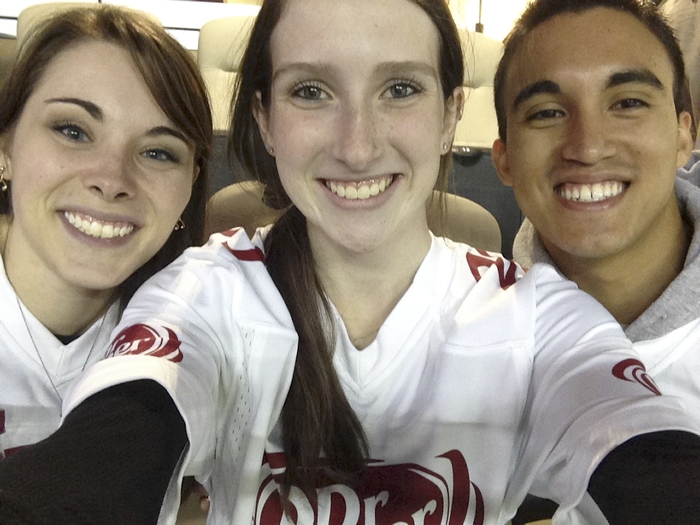 In September, I got a Facebook notification. Being 22 years old and somewhat active with social media, this was a pretty common occurrence.

However, this message stated that my mom, Charissa, had nominated me in a Dr. Pepper Tuition Giveaway, and I needed to sign in to complete the application. The potential prize was up to $100,000 in tuition.

Now, I rarely sign up for things online; I appreciated my mom’s intent, but my initial reaction was, “This sounds pretty weird … who wins stuff like this?” But knowing that my mom meant well and wanting to honor her idea, I finished the application and posted a request to my Facebook friends to vote for me.

I needed 50 votes to advance in the competition and make a video for Dr. Pepper, and I figured, why not try? At least then I can explain why I want to continue helping veterans through recreation therapy and maybe this could be fun!

I got the required number of votes, and proceeded to make a video during fall break when I went home to Bowie, Maryland. I knew nothing about making a video of any kind, so I enlisted the help of a friend from church who was able to spend a couple hours shooting and editing footage. I submitted a 60-second video to Dr. Pepper, and after that, all we could do was sit back and wait.

When I got a call from Dr. Pepper in November explaining that I’d been selected as a finalist in their Tuition Giveaway, I was dumbfounded. After all my skepticism and reluctance to enter this competition in the first place, I was being offered a guaranteed $2,500 scholarship, as well as an all-expenses-paid trip to California.

My first thought was, “Shoot, now I have to learn how to throw a football.”

My family is talented in many areas, but athleticism was never one of our strong suits. I knew I’d have to start practicing.

I never expected the amount of support I’ve received from the Catawba community as a result of this competition. People I’d never spoken to before were wishing me luck, cheering me on as I practiced, and the staff here offered their assistance multiple times.

When Dec. 3 finally arrived, I departed for Charlotte at the crack of dawn to meet my dad at the airport. Our flight was scheduled to depart at 9:30 a.m., however, between a 3 1/2-hour delay before take-off, an emergency diverted landing in Fresno, California to repair a mechanical issue and a few other problems, we didn’t reach the San Francisco airport until almost 8 p.m. – 7 hours after our expected landing time.

Since we missed dinner with the other competitors, we were encouraged to order room service and have a relaxing night. Considering it was already midnight to our bodies, we were more than happy to comply.

The next morning, I finally was able to meet the other finalists in the competition: Aven, from Hawaii; Wesley, from Oregon and Sarah, from Washington.

After receiving our official Dr. Pepper football jerseys, we made it over to Levi’s Stadium for the preliminary throw that afternoon. We each had five practice throws, before the actual competition began.

We each had 30 seconds to score as many throws as possible through giant Dr. Pepper cans. Unfortunately, I wasn’t one of the top two, so I didn’t advance to the final round. However, even through my disappointment at the time, I was genuinely happy for Sarah and Wesley, the two students who did make it.

Just because Aven and I weren’t still in the running for the $100,000, the Dr. Pepper team didn’t stop spoiling us. That night, we all were taken out to Dave and Buster’s. It was a great way to unwind after a pretty stressful day, and Dad and I even walked away with a couple of souvenir mugs to commemorate the night.

The next day, the Dr. Pepper team whisked us off to the pre-game party next to the stadium, where Aven and I were in for a huge surprise – the $2,500 scholarship we thought we were receiving was being tripled to $7,500. Once again, I was dumbfounded. Any trace of disappointment I may still have felt was certainly gone now.

The rest of the night became a bit of a blur for me, and I can imagine it was even more so for Sarah and Wesley. Sarah and I had definitely become close, so I was glad I could be there to support her during the game and before she and Wesley went to compete during halftime.

As Aven and I stood off on the sidelines, I remember staring up at the Jumbotron and watching Sarah’s determination as she threw 14 footballs through her target – and the disbelief on her face the moment she realized she’d won.

I can honestly say I was happier in that moment than in any other during my entire trip.

What impressed me most about Sarah was her kindness and sincerity, as well as her story. Not only had she recently undergone back surgery to correct her scoliosis, her younger brother has Down’s syndrome and her going to college was a significant financial burden for her family.

With that knowledge, I knew that no matter how much I may have wanted to win, I would have wanted her to win even more. In a way, I’m grateful I didn’t even need to try; I could just sit back and cheer for her.

No matter how this weekend may have turned out, I feel incredibly blessed for the opportunity I was given because of Dr. Pepper. Not only did I get to tell my story about my love of veterans and my experience with an incredible group of performers, I was able to meet several other young people who I know are going to go out and do their part to make this world a better place.

Yes, our trip was amazing, and being spoiled by the DP team was something I’ll appreciate forever, but the best thing I can share about this entire journey was knowing that Sarah earned the grand prize. I may not have made it as far as I’d originally hoped, but no matter what, I still feel like a winner.