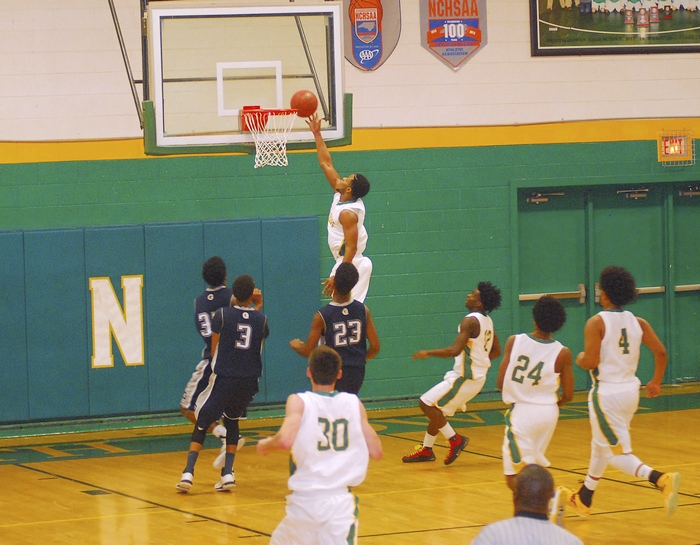 Adam Houston/The Salisbury Post North Rowan's Jalen Sanders (center) goes up for a layup Thursday in the third quarter of a nonconference game against Greensboro Grimsley. Sanders scored 14 points in the Cavaliers' 62-49 win.

SPENCER — It had been eight days since North Rowan played a basketball game, but they still put it all together in the second half Thursday to roll past Greensboro Grimsley, 62-49.

Numerous Cavaliers took turns making the key plays as they gradually built a double-digit lead in the third period and made it stand. Guards Joseph Scott and Jalen Sanders provided the most firepower with 15 and 14 points respectively, but crucial plays were also turned in by Henderson Lentz, Wesley Jeffries and Alexis Archie.

“We needed that time off to get our football guys integrated into our system,” coach Andrew Mitchell stated. “We looked a little ragged at times but I thought our guys showed a lot of heart. That was a pretty good win for us against a very good team.”

The Whirlies (6-2), out of the 4A All Metro League in Greensboro, had a distinct size advantage but opened the game by missing their first eight shots, mostly at point blank range. They also hurt their chances to come back by hitting only 15 of 30 free throws.

“We didn’t come to play at the start of the game and missed a lot of shots,” Grimsley coach Thomas Griffis said. “We were just not focused and ready to play against a very tough team”

North Rowan (5-1) pushed the ball at a rapid pace all night, leading to easy transition baskets while also causing more turnovers they they would prefer.

After easing to a 20-16 halftime lead, the Cavaliers made their first big move to open the second half behind Scott, the 6-foot-1 sophomore. He notched a pair of layups and two free throws to give North Rowan a 28-17 lead during the first two minutes of the third period. Grimsley cut it back to four but Lentz nailed a clutch three from the corner late in the period to widen the margin.

The next hero for North Rowan was bulky center Wesley Jeffries with a pair of  inside baskets midway in the final quarter that put the Cavaliers up 47-38.

“I didn’t play a very good first half,” Jeffries said, “so I tried my best to do better in the second half and I did.”

As expected, senior point guard Sanders played the role of closer by protecting the ball and hitting clutch free throws  in the final two minutes.  He scored 12 of his 14 in the second half, hit 6-of-9 free throws and grabbed seven rebounds.

“I feel like our bench did a really good job tonight,” Sanders said. “We wanted to play at a fast pace but of course when we need to slow it down, Coach knows I can do that for the team too.”

North Rowan gets right back in action Saturday with a 7:30 p.m. home tip-off against Charlotte’s Crossroads Charter team.