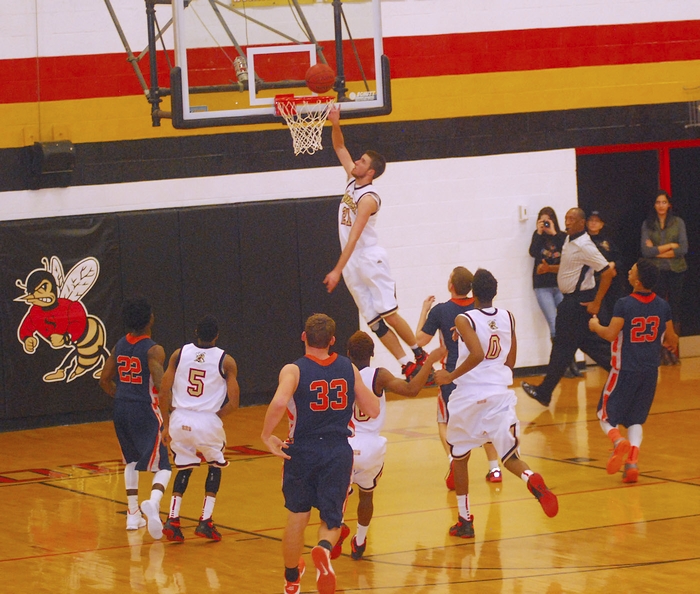 Adam Houston/The Salisbury Post Salisbury's Wes Fazia goes up for a transition layup Wednesday at home against Carson. Fazia scored 15 points in the second half on his way to 17 points. The Hornets defeated the Cougars 78-68 in nonconference action.

SALISBURY —  Both coaches were amazed by Carson’s 34 points in the fourth quarter.

That matched the Cougars’ production in the first three quarters of a 78-68 loss at Salisbury on Wednesday.

“(Assistant coach) Erich Epps told me to smile and enjoy the win, but it’s not that easy to do,” Salisbury coach Jason Causby said. “It was like Carson flipped a switch the last six minutes or so and played their rear ends off when they almost had no reason to. They knocked us back on our heels, but we were able to weather the storm.

“Carson is good, and this was a game that might’ve gotten away from us last year.”

Salisbury (7-2) got 18 points from veteran guard Deshawn Troutman, 17 from improving big man Wes Fazia  (15 in the second half)  and 12 from muscular forward D.J. Alexander, who battled for three consecutive offensive boards on one flurry.

“We lost a tough game to Carson at Carson (51-50), but that happens sometimes,” Alexander said. “The mindset tonight was just to keep working  until we got what we wanted.”

Carson (5-5) countered with a career night from athletic guard Jonathan Rucker, who hit four 3-pointers and scored 23, but it wasn’t enough. Rucker had 15 points during Carson’s hectic spree in the fourth quarter, but he was the only Cougar who finished in double figures.

It was a significant win for Salisbury because it hadn’t beaten Carson since the 2009 Sam Moir Christmas Classic. The schools don’t play every year, but the Cougars’ winning streak in the series had reached seven.

“It feels good to finally beat Carson,” Troutman said. “It was the first time for any of us. We were aggressive at the start, we stayed aggresssive, and we showed we’ve got a chance to be a very good team.”

After an even first quarter, the Hornets dominated the second quarter. Troutman and Alexander hit 3-pointers during a 10-1 run that propelled Salisbury to a 34-23 halftime lead.

“They came out harder than us, wanted to win more than us, so all hands to Salisbury,” Rucker said. “Their size didn’t scare us, but we just failed to match their intensity and didn’t play good enough defense.”

Nothing changed in the third quarter, as the fast-paced Hornets expanded their lead to 52-34.

“They’re very big, but they’re still athletic,” Carson coach Brian Perry said. “They’ve got a heck of a team, and to beat a team like that we’ve got to have total effort for the entire game — not just the last six minutes.”

When Alexander drove the lane for two points to open the fourth quarter, Salisbury was up by 20 points, but then Rucker started making 3-pointers from everywhere. Darren Isom, Marquez McCain and Jamarius Hairston started attacking the rim, and Salisbury’s lead melted. After a three-point play by McCain, Carson’s deficit was reduced to  66-57 with 2:25 remaining, but Fazia, Alexander and Alex Yang made their free throws, and the Hornets stabilized and held on.

“Carson laid it on us last year when we were 6-2 and then we went into a spin down to 6-5,” Causby said. “So it’s a big win for our guys to know they can beat Carson. It’s another small step for this group.”