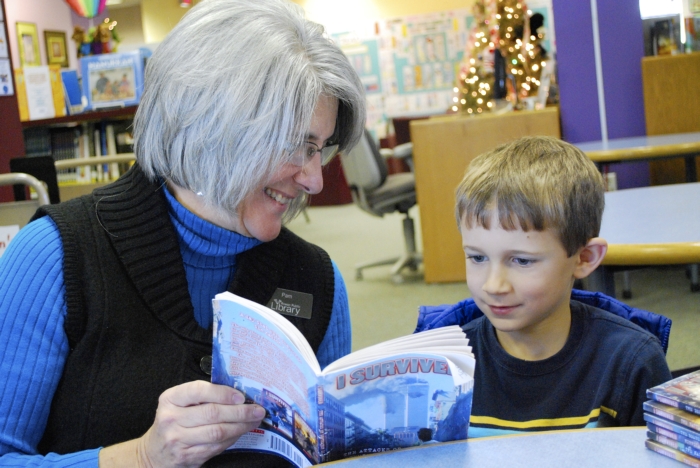 ELIZABETH ROY/FOR THE SALISBURY POST Children's Librarian Pam Bloom reads with 7-year-old Ian Beck. Pam worked with Ian to uncover his love of nonfiction and history in books. 'It's just the look on their faces when they find that book that they finally connect with Ð especially that book that they think is too hard for them,' said Pam. 'It's just wonderful.'

Second-grader Ian Beck has always been an eager artist and a diligent student. For reading books, however, he was not so eager. Ian read when he was asked to, but never as a choice.

And then he found the book that changed it all.

“We were looking for a book that was a good fit for a beginning reader,” said Pam Bloom, children’s librarian for Rowan Public Library.

During one of the Beck family’s routine visits to Rowan Public Library earlier this school year, Pam helped Ian find books on a subject that fascinated him: the Titanic. Among the books Ian chose was one from the “I Survived” series by Lauren Tarshis.

“And when Ian came back in with this big grin on his face, I knew we’d found it,” said Pam.

The “I Survived” book series covers disasters including the Sept. 11th attacks, Hurricane Katrina, and the destruction of Pompeii. For 7-year-old Ian, these thrilling historic accounts have ignited a passion for reading that he didn’t know he had.

“It’s fun to teach him things, but it’s really fun to see him learning things on his own,” said Ian’s mother, Amy Beck.

A retired first- and second-grade teacher, Amy Beck has homeschooled her three children ages 3, 7, and 10 since her eldest began kindergarten. Ian’s language arts instruction includes spelling, writing, grammar, and visits to the familiar nonfiction shelves at the library.

“He’s reading for content. He can tell you all sorts of details from the books,” said Amy Beck of her son’s passion for nonfiction.

Ian’s vocabulary has broadened noticeably in the months since he began reading, Amy says.

“It’s amazing how he’s learned new words and been able to use them.”

To encourage this metamorphosis, Pam Bloom works as a matchmaker, uniting children with books that spark a love of reading. The first step, she says, is to find a subject or section that intrigues the young reader.

“I’ll ask a kid, ‘Do you like stories or facts?’” said Pam. “Kids don’t own a lot of stuff, but they can own what they read and they can control it.”

And when the connection is made, it’s magical.

Book series like the one Ian is reading are very helpful, Pam says, as kids can transition comfortably to a book by a familiar author and in a similar style.

So far Ian has read and written reviews for nine of the “I Survived” chapter books. “I Survived the Sinking of the Titanic, 1912” was his first chapter book, and the experience of reading it has empowered Ian to take on longer reads. His current reading project is a 24-chapter book, “The Dog Who Thought He Was Santa” by Bill Wallace. But of course, this is in between his “I Survived” book reading.

Ian’s grandmother, Bonnie Allgood of Henderson, is purchasing Ian his very own “I Survived” collection book by book, as a reward for his fruitful reading.

“She said that if I read the books she’ll keep buying them,” Ian said, grinning.

Having relocated from Henderson to Salisbury in March of this year, the Beck family immediately gravitated to the library as a home base and resource for homeschool education. In addition to its physical resources, the library offers Kids Space online tools which enable parents to do everything from tracking children’s reading levels to reading comprehension testing.

“There’s so much more than checking out books,” said Pam of the library’s resources.

Ian eagerly awaits the release of Tarshis’s next book, “I Survived the Great Chicago Fire, 1871.” And Ian’s shy, beaming smile when he thumbs through his stack of “I Survived” books says it all. It tells of the joy he’s found in reading and the pride he takes in his literary accomplishments.

“I struggled with being interested in reading as a child,” said Amy. “It’s really nice to have a child who enjoys reading.”