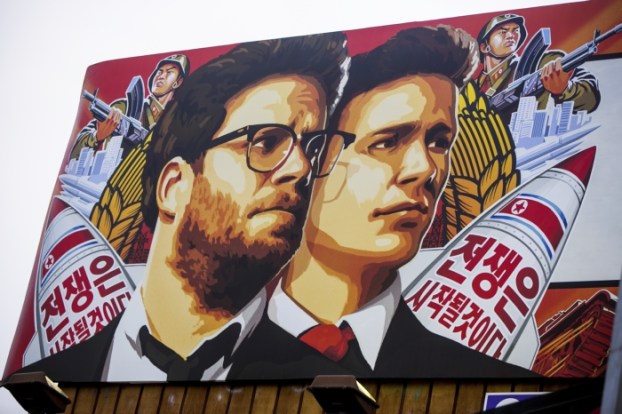 A banner for "The Interview"is posted outside Arclight Cinemas, Wednesday, Dec. 17, 2014, in the Hollywood section of Los Angeles. A U.S. official says North Korea perpetrated the unprecedented act of cyberwarfare against Sony Pictures that exposed tens of thousands of sensitive documents and escalated to threats of terrorist attacks that ultimately drove the studio to cancel all release plans for "The Interview." (AP Photo/Damian Dovarganes)

1. WHAT DROVE OBAMA’S DECISION ON NORMALIZING WITH CUBA

The president was driven in part by realizing that the policy toward Cuba was isolating the U.S. from the rest of the world.

Bells tolled and school children applauded on the island when they heard Raul Castro deliver the news. Outrage among Cuban-Americans in their Florida hub was understated, showing vast change in recent years.

In a country where most people have never used the internet, Pyongyang has amassed a small army of computer coders who may have unleashed an attack against Sony.

4. AP INVESTIGATION: HUNDREDS OF CHILD DEATHS COULD HAVE BEEN PREVENTED

Nearly 800 kids died of abuse or neglect in the U.S. even though protection agencies knew they were in danger.

5. WHO HAS FAITH IN THE RUBLE

Dzhokhar Tsarnaev will make his first public appearance in a year and a half as he faces 30 federal charges.

The incoming Senate majority leader tells the AP that he’ll do everything he can to stop stricter limits on emissions from coal-burning power plants.

8. WHERE FRACKING WILL BE BANNED

The decision by New York state is cheered by environmentalists, while the industry and its supporters express outrage.

9. STUDY: ALCATRAZ INMATES COULD HAVE SURVIVED FAMED ESCAPE IN 1962

Dutch scientists, studying the tides and currents, conclude the three men might have made it to land.

10. WHICH ‘SMART’ PRODUCTS TO GIFT THIS HOLIDAY SEASON

A toothbrush with Bluetooth connectivity, a Mr. Coffee machine you can start remotely with your phone, and a scale that tracks your weight loss (or gain) are among this year’s best offerings.

As families begin traveling this holiday season, the N.C. Department of Transportation will suspend most road construction activities on major routes across... read more