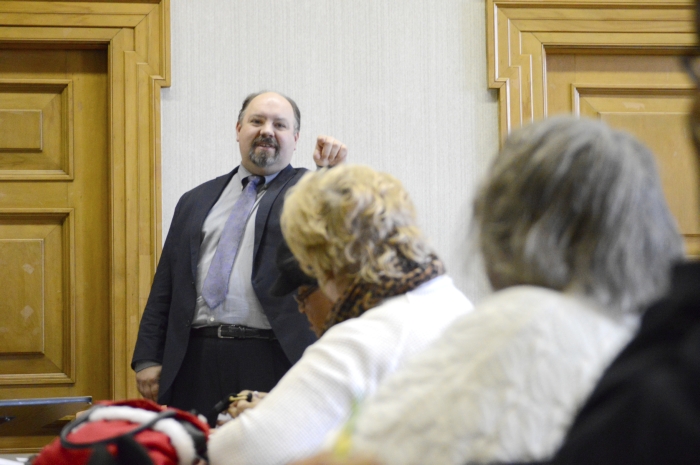 Known as a solidly red county, Rowan picked Republicans for nearly every elected office in the 2014 elections. In part, by communicating effectively and developing a uniform message, Democrats can have a stronger presence in North Carolina, said State Democratic Party Chairman Randy Voller on Tuesday.

“We have to stand together in unity because together we will achieve,” Voller said. “If people get the impression that we stand apart, they will act accordingly. They will vote accordingly.”

Voller spoke on Tuesday to the Rowan County Senior Democrats during their regularly scheduled meeting. The title of his speech was “Winning as Democrats.” He spoke about positive aspects of the Democratic Party in North Carolina, but also mentioned several areas that local political parties could improve in. Voller said a firm stance on certain issues is important to voters.

“Too often the Democratic Party, our folks, have been willing to communicate a message that’s mushy and has no backbone,” he said. “I’ve actually heard people say this: ‘I don’t like Thom Tillis, but at least I know what he stands for.’ Ok, so I know the guy has an ax and he’s going to execute me, but at least I know where he stands. And, that’s better than not knowing where he stands.”

Voller said voters most frequently want to know how a particular candidate can improve the local community.

By simply educating voters about the Democratic Party’s values, Voller said more of the state could turn blue.

“If you actually put out our values on the blue team and people come to vote, we win,” Voller said. “When we’re mushy about our values, we lose. I’m just here to tell you that we are not on our back, we are strong, can be stronger and the numbers back me up.”

After his speech, Voller spoke briefly about his current position as the chairman of the state party. In November, Voller decided that he wouldn’t seek re-election to the position. His current term ends on Feb. 7.

“They could re-elect me,” he said. “I just said I’m not running. I’m most interested in issues and I’m trying to make this chair race about issues.”

Another reason not to run, Voller said, is that the chairman position isn’t paid.

“When I do something, I put all my time into it,” he said. “It’s hard to focus on that when I also have to provide for my family.”