Santa just one of the stars at Autumn Care Christmas 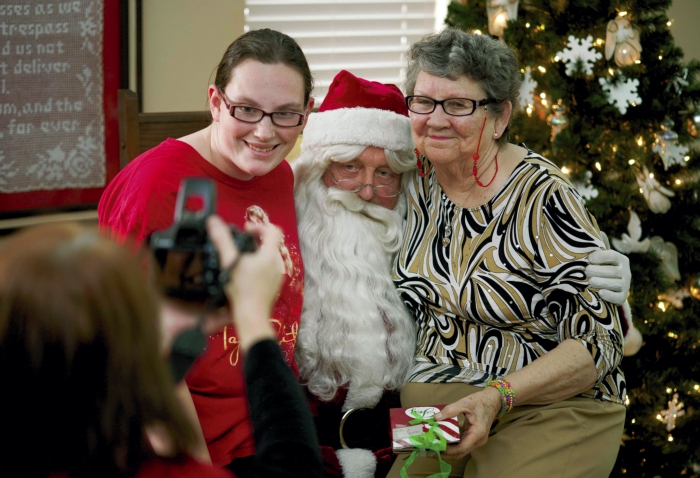 JON C. LAKEY / SALISBURY POST Santa Claus made his annual visit to Autumn Care of Salisbury on Tuesday. Alexis Spence and her grandmother Hilda Morgan smile for a photograph while sitting on Santa’s lap. The facilitywide Christmas celebration is a favorite of staff, volunteers, residents and their families. It gives everyone a chance to visit their loved ones in a festive environment during the busy holiday season.

SALISBURY — When Dottie Bedford, 89, sat on Santa Claus’ lap Tuesday afternoon at Autumn Care, she had a request for Christmas.
“I asked him for 90 more years,” she said.
What was the big elf’s reply?
“Oh, sure.”
Bedford had a good laugh and invited a visitor to see how her room was all decorated for Christmas. A casual observer would never guess Bedford will be 90 in June. She looks much younger, and she said the secret is staying as active as possible.
Bedford was a longtime finance director for South Pasadena, Fla., — a town she left in sound financial shape when she retired.
“I loved my working days,” Bedford said. “I never left a penny sitting idle.”
Bedford joined the other residents and rehabilitation patients at Autumn Care Tuesday for the facility’s annual Christmas Open House.
Many family members visit on this day when residents can have their pictures taken with Santa in the chapel, go to the therapy gym for live music and food, stop by the dining room for more food and drink and swing by the recreation room to watch a video reviewing all the activities over the past year.
Several door prizes were awarded during the afternoon.
“This is a great facility,” Bedford said. “They really take care of you.”
Activities Director Kim Crawley said the Autumn Care staff determined an afternoon open house for Christmas was best for everyone, including the family members who are visiting. Many of those family members are older now, too, and they would rather drive in the daytime, Crawley said.
Mel Wofford of Lexington has served as Santa Claus for about 10 years in a row, and he’s a good one, having great fun with the residents. Print photos of their visits with Santa will be delivered to residents’ rooms next week. They also can receive digital copies by sending e-mail requests.
Local singer and musician Lonnie Carpenter played guitar and led everyone in Christmas songs in the therapy gym. Crawley said that’s where the rock ‘n’ rollers hung out.
As gatherings go at Autumn Care, Christmas is up there with Halloween and Super Bowl parties, when participants try to win a big prize by coming closest to the final score.
But make no mistake, “they look forward to the Christmas party,” Autumn Care Administrator Glenn Terry said.
Bessie Cooper, 92, is a former welder for Freightliner in Gastonia. She has been a resident of Autumn Care for five years, and she had a tableful of family visiting her Tuesday — three daughters, two sons-in-law and a granddaughter.
“This food is delicious,” Cooper said after the family had prayed over their plate of shrimp and chicken.
Daughter Mary Beth Corbett and granddaughter Raven Corbett posed with with Preston “Pat” Lambert, 89, as she sat on Santa’s lap.
“I’m the dancer,” Lambert said of her reputation around Autumn Care. “I make my own music.”
She promptly showed off some of her best moves.
Most of the gifts presented to residents by Santa came from the visiting family members. Autumn Care supplied the others, and Santa made visits to rooms of people who couldn’t make it to the chapel.
Hilda Morgan and her 18-year-old granddaughter, Alexis Spence, both sat on Santa’s lap, and Hilda’s gift from her daughter — Alexis’ mom — was 21 pairs of earrings. Hilda wears earrings all the time, so it was a great gift.
Alice Overcash received a M&Ms blanket and pillow from husband Jerry and daughter Stacey Cannon. After the visit with Santa, the trio were thinking about hearing Carpenter andthe music.
“I’m going to drag her to all of it,” Cannon promised.
Tammy Robertson, a social worker at Autumn Care, took the photos for everyone. One of her “elf” helpers was Becky Parks, known around the facility as “the Cake Lady.”
Once a month, Parks makes a couple of cakes — always at least one coconut cream cake — to celebrate the residents’ birthdays. She’ll mix in some banana pudding, too.
The cake tradition started in 2008, when Parks brought a coconut cream cake to her uncle, Claude Ketchie, and they shared it with several other residents.
Parks has been as volunteer at Autumn Care ever since, providing help whenever Crawley calls her.
Claude, who was a popular resident at Autumn Care, died in 2011.
Resident Rita Ashley called the Post at least three times in the week leading up to Tuesday’s Christmas Open House, hoping the newspaper could come to see how the activities staff puts everything into their jobs.
“There’s so much love and devotion to these patients,” Ashley said.
Contact Mark Wineka at 704-797-4263.