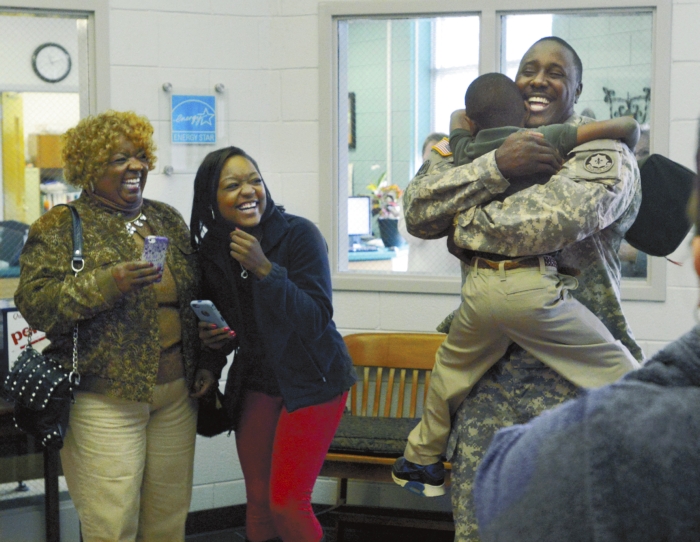 Wayne Hinshaw / for the Salisbury Post Larrius Cleveland hugs his son L.J. Cleveland Jr. in the hallway at Forest Park Elementary in Kannapolis. Larrius surprised L.J. at the school on his return from military service in the U.S. Army. On the left is L.J.’s great grandmother Mary Barnes and mother Ebony Cleveland.

When U.S. Army Spc. Larrius Cleveland found out he would be coming home for the holidays, he was determined to make this Christmas a memorable one – starting with an unforgettable surprise for his 6 year old son, L.J. Cleveland.

“I didn’t care about anything else,” Cleveland said.

Cleveland has served in the army for almost five years now, and is currently stationed in Germany.

Although he was able to spend some time in the United States this summer, it’s been a while since he’s been home for the holidays.

“I haven’t been here for Christmas for two years,” he said.

So, without telling L.J., Cleveland collaborated with his son’s teacher and made plans to join his son for lunch Tuesday at Forest Park Elementary School in Kannapolis.

“I thought he would appreciate it a lot more,” he said.

Cleveland left Germany Monday and spent 16 hours in transit before he arrived in uniform at Charlotte Douglas International Airport, and he immediately headed to the school after landing.

Cleveland made it to Forest Park with just a few minutes to spare.

Meanwhile, L.J. and his classmates, operating on their usual schedule, made their way down the hall toward the cafeteria. They rounded the corner just after 11:07 a.m.

L.J. didn’t notice the man in uniform standing near the cafeteria door at first, but when he did, his jaw dropped.

“He had a shocked face,” Cleveland said after the fact.

L.J. said when he saw his father, the first thing that went through his mind was, “Why is he here?”

Not wanting to break the rules, he took another step toward the cafeteria. Once he received a nod of approval, however, he broke out of line and jumped into his father’s arms and wouldn’t let go.

Then the tears began to flow – L.J., his teacher, school staff and even Superintendent Dr. Pam Cain had to wipe away their tears.

After a few minutes, L.J., his father, mother and great-grandmother joined L.J.’s classmates in the school’s cafeteria for lunch.

Although physical visits are few and far between, the father and son use Face Time, a video-calling program, to talk nearly every day.

L.J.’s teacher, Leigh Yelton, said the exchange was touching to see, especially after an experience she had with L.J. in November around Veteran’s Day.

Yelton was explaining the significance of Veteran’s Day to her class, when she said L.J. “got all teary and emotional.”

While she consoled L.J. outside of the classroom, the rest of the students decided they wanted to write letters to Cleveland to thank him for his service.

Those letters were hand delivered to him Tuesday.

“Thank you dad for keeping me safe and I miss you,” L.J.’s letter said.

“He never expresses how he feels about me being in the Army,” Cleveland said.

“He never gets to see me in uniform,” he added.

“The thing I miss most about him is his smile,” he added. “He’s always there for me.”

Cleveland said he’s looking forward to spending quality time with L.J. and getting ready for Christmas over the next few days.

L.J. said he got his Christmas present early, but he still hopes to go to the mall and buy new shoes while his dad is home.

“My favorite thing to do with him is to go out and play with him,” he said.