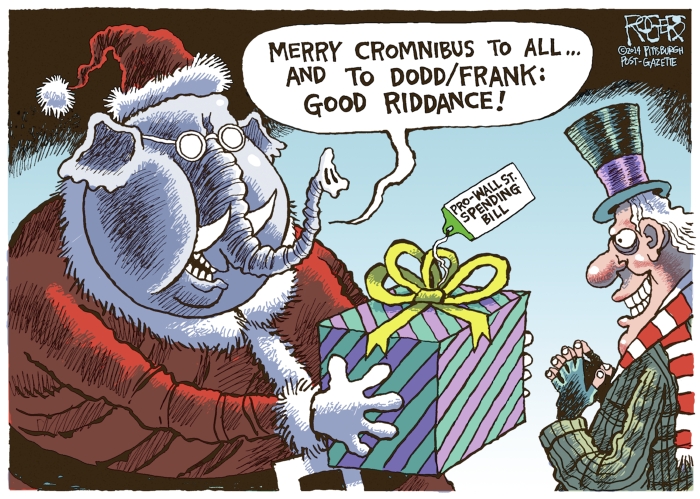 Excerpt from a speech U.S. Sen. Elizabeth Warren, D-Mass., made on the Senate floor regarding bank regulations in the omnibus budget bill:

And yet here we are, five years after Dodd-Frank with Congress on the verge of ramming through a provision that would do nothing for the middle class, do nothing for community banks, do nothing but raise the risk that taxpayers will have to bail out the biggest banks once again…

So let me say this to anyone who is listening at Citi[group]. I agree with you Dodd-Frank isn’t perfect. It should have broken you into pieces!

Instead of passing laws that create new bailout opportunities for too big to fail banks, let’s pass… something… that would help break up these giant banks.

And now we’re watching as Congress passes yet another provision that was written by lobbyists for the biggest recipient of bailout money in the history of this country. And it’s attached to a bill that needs to pass or else the entire federal government will grind to a halt.

Think about that kind of power. If a financial institution has become so big and so powerful that it can hold the entire country hostage. That alone is reason enough to break them up.

Washington already works really well for the billionaires and the big corporations and the lawyers and the lobbyists.

We were sent here to fight for those families. It is time, it is past time, for Washington to start working for them!