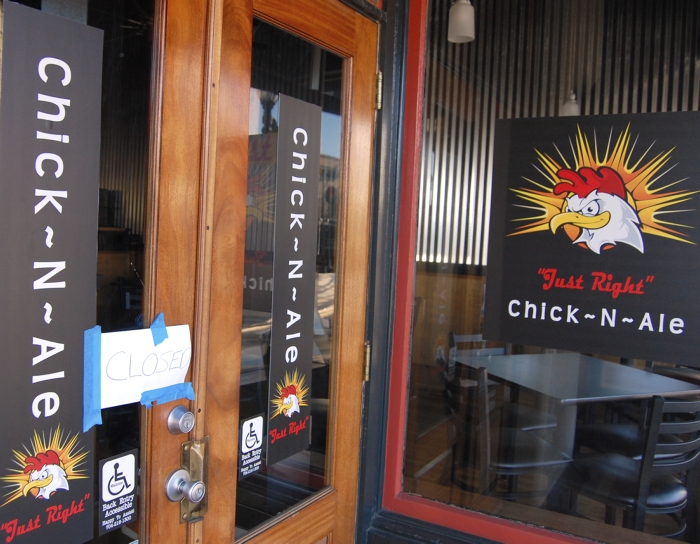 Chick-N-Ale in downtown Salisbury has closed after being open for less than three months.

A downtown Salisbury restaurant has closed permanently after being open for less than three months.

Chick-N-Ale, at 115 E. innes Street, is closed. The restaurant, which featured craft beers and a southern-style menu, opened in late September and seemed to have a steady stream of customers.

Chick-N-Ale’s owner, Stan Lineberry of Taylorsville, said in an emailed statement that the group of investors behind the restaurant “pulled the plug.”

“Our concept required a higher volume of customers. Our concept really needed a standalone building with a drive through. It was not going to grow fast enough without it. We tried to put the wrong type of restaurant in an otherwise great restaurant space,” he said in the statement.

Reached by phone, Lineberry said his group plans to open another Chick-N-Ale, but that it is too early to know when or where.

The building’s owner, Michael Young, said in the same statement that the investors are “on the hook for rent for two years. We don’t want the building to sit idle. We are working with them to put a new operator in the space.”

“It seems the restaurant investment guys from Charlotte play with live ammo … they made really nice building improvements and a sizeable investment in my building. I am dismayed that they did not to want to tweak their concept and make it work.”

Reached by phone, Young said his primary concern is keeping a long-term tenant in the building.

As a property owner and supporter of the downtown area, he said, he doesn’t want to see an empty space.

A listing for the building has been posted on Craigslist, a popular website where people can post ads for services, rentals and more.

The ad states the rent is $3,800 a month with a three-year lease. It also states everything belonging to Chick-N-Ale can be bought for $72,000.

“The restaurant group will sell the equipment to anyone that wants to take over the lease. If the new operator does not want it, it will all go to a broker,” Young said in the statement.

Paula Bohland, executive director of Downtown Salisbury Inc., said she’s sad to see the restaurant close and that it was a great community partner during the short time it was open.

She said she didn’t have much information about why the restaurant closed, but said Chick-N-Ale’s investors likely didn’t make the decision lightly.

“Businesses open and close everyday” across the country, she said, adding it is especially hard to run a restaurant.

As for how other downtown businesses are doing, Bohland said she recently did an informal poll of merchants. She said all the merchants she talked to said business is much better this holiday season than in previous years.

Anyone with a Chick-N-Ale gift card can stop by the restaurant for a refund between noon and 4 p.m. Thursday or Friday.