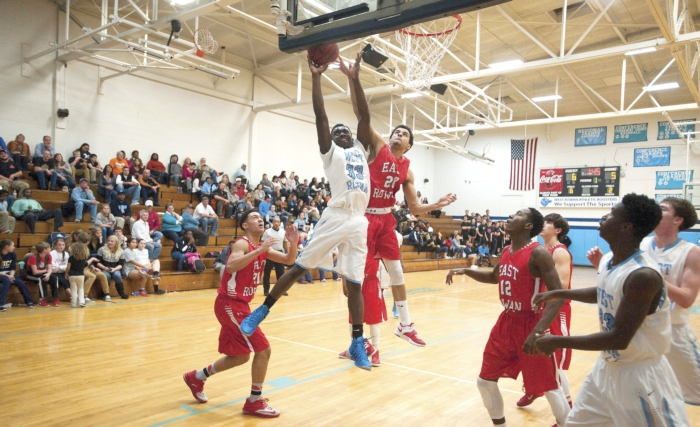 MOUNT ULLA — You know West Rowan coach Mike Gurley is starting to feel it a little bit when he manages to compare the construction of his current team to the building of the Panama Canal.

“They had to get from the Atlantic to the Pacific, so you know there were some rough days with yellow fever in there,” Gurley said. “We’re young and we’re going to have our rough days, but we’re building something good.”

West Rowan’s 56-52 win against East Rowan was the Falcons’ fourth win in their last five outings and was mostly good. After a struggling first half that ended with the Mustangs on top 20-19, both teams played a second half filled with big shots and big moments.

“That first half probably set basketball back 20 years,” East Rowan coach Trey Ledbetter said. “But I’ve only got good things to say about our second half.

“We didn’t beat ourselves tonight — West Rowan beat us. They beat us mostly at the foul line with guys stepping up and making free throws.”

“No excuses, but you’re as good as your point guard,” Ledbetter said. “We made 22 turnovers.That hurt us.”

The guy who gave East Rowan a chance to win was Logan Shuping, a guard known mostly for the way he can swing a golf club. Shuping buried six 3-pointers, and each one seemed a little deeper than the previous one. He nailed three rainbows in the fourth quarter.

“We talked in the scouting report about how he shoots the ball like (former Falcon) Seth Martin, but maybe we didn’t believe it and we slept a little on the first couple he hit,” Gurley said. “But I’ve got to give Shuping credit. He hit some tough shots even when we’re concentrating on him and doing everything we could to stop him.”

When Shuping fouled out in the last minute, even Gurley joined the applause.

Sophomore guard Kortez Weeks was steady and freshmen Caleb Mauldin (14 points) and Martavio Rankin (13) were good again for the Falcons (5-4, 4-1). Rankin made clutch free throws. Mauldin had a nine-point third quarter after a quiet first half.

“He has a shot fake that kept getting us to leave our feet and he makes his free throws,” Ledbetter said. “I’m not saying he plays like a senior, but he definitely doesn’t play like a freshman.”

West Rowan took a 35-31 lead to the fourth quarter but every time it appeared the Falcons were on the verge of taking control, Shuping hit a 3-pointer.

The other factor for the Mustangs in the fourth quarter was Naquis Caldwell, an athletic forward who’s been quiet in recent games. Caldwell was attacking the boards down the stretch more fiercely than he’s done all season.

West Rowan senior Celexus Long made the winning plays for the Falcons late. One was a huge defensive rebound on which he fended off  the taller, stronger Caldwell.

“I just had to body out,” Long said. “That was a rebound my team had to have.”

Long also made the biggest shot — a right-wing 3-pointer with 1:15 remaining after East Rowan cut the Falcons’ lead to two and had momentum.

“You have to have the confidence to take a big shot,” said Long, who was quiet until the fourth quarter. “I was open and  I let it fly.”

Gurley said he had a lot of players under the weather and that Long was the sickest, but he came through when it mattered most.

“He’s got the green light always,” Gurley said. “You have to let a guy like Celexus shoot it because he can really stroke it.”