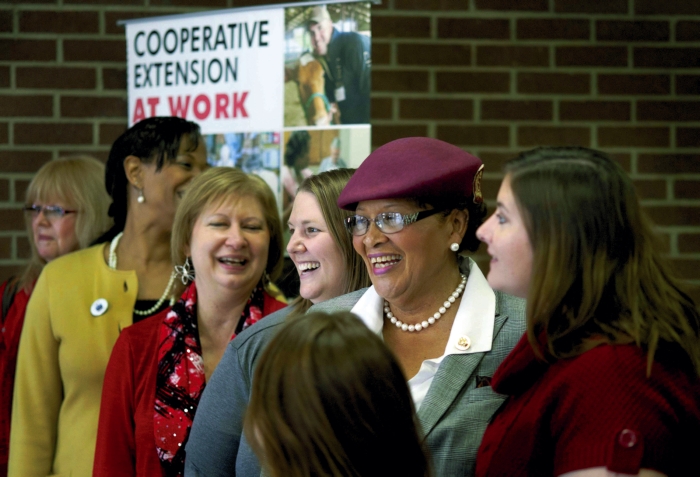 Just over a month after winning the 12th Congressional District race, U.S. Rep. Alma Adams on Tuesday returned to Rowan County to mingle with the staff of Rowan County’s Cooperative Extension Office.

Adams’ time in office officially began on Nov. 12. A Democrat, she won the election to fill the remainder of the former 12th district representative Mel Watt’s time. Watt was previously the only representative the district ever had. He resigned to be the director of the Federal Housing Finance Agency.

Adams spent her time Tuesday at the extension office on Old Concord Road talking to employees, touring the building and eating lunch with extension staff. The lunch, as informal as Adams’ visit, included barbecue, slaw, hush puppies and sweet tea.

She said the informal nature of her visit was the best way to get to know constituents in her district.

“It’s one of the smaller areas, but yet it’s still important to the 12th District,” Adams said. “I wanted to make sure that every county, every area in this district, understands that they are a significant part of it. I want people to feel connected to what we’re doing in the 12th district office.”

With about a month of Congressional experience, Adams said she is still learning. She compared her first few weeks in Congress to her time in the North Carolina General Assembly. One of the most surprising experiences, she said, was the limited amount of time actually spent on the floor of the U.S. House Chambers.

“In the North Carolina House, we might be on the floor 12 to 14 hours debating an issue ” Adams said. “You have that interaction back and forth. You don’t quite have that, or at least I haven’t seen it yet, in Congress.”

Known for wearing flamboyant hats, Adams said she’s not allowed to wear her headgear on the house floor.

“It’s not a major issue because we’re not on the floor that long,” she said. “I’ll tell you, I don’t think I’ve been on the floor an hour the whole time I’ve been there.”

Adams joked that she’s still first alphabetically in the U.S. House when voting.

Adams may still be learning her way around, but says she has a leg up on her other freshman legislators. Two of the issues in her month in office included the Keystone XL Pipeline and “cromnibus” spending bill. She voted “nay” to both.

Accountability was one of her primary concerns about the Keystone XL Pipeline, which would’ve run across the Great Plains and to Houston if approved.

“I didn’t see any accountability on spills for example,” she said. “Would the taxpayers have to pick up that tab? And, I didn’t really see any permanent jobs.”

When commenting on her spending bill vote, Adams said the number of additional policy issues attached to the bill was concerning. One example she cited was a measure that increased allowable campaign contributions.

“There were a lot of bad pills in the [spending] bill to swallow,” she said. “I think we have to be a little more responsible as elected officials and know what we’re voting on. You couldn’t possibly know everything that was in that bill.”

Adams said she plans to return to Rowan in 2015 for a town hall meeting after being sworn in for the next two years.