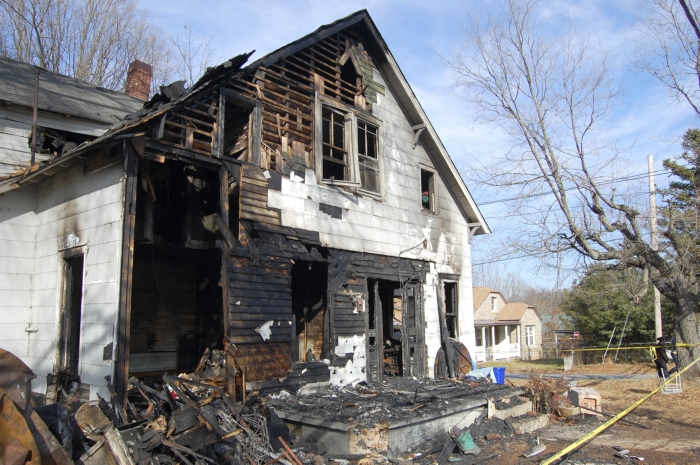 No one was injured when this home on First Street caught fire around 1 a.m. Monday morning.

A Salisbury woman is glad to be alive after a fire damaged her home early Monday morning.

Alease Taylor said she had fallen asleep while watching TV in her den when she woke up to the smell of smoke just before 1 a.m. At first, she said, she thought somebody was burning something outside. But when she saw smoke moving through her home, at the corner of First and West C streets, she knew something was wrong.

She followed the smoke to the kitchen and then went outside.

The fire was on the front patio, and Taylor went to a neighbors house and called 911.

Salisbury Fire Battalion Chief Chris Kepley said the cause of the fire was electrical — an overloaded extension cord.

Taylor was uninjured. Her daughter who lives with her was at work at the time of the fire, and no one else was in the house.

“I’m grateful the lord woke me up,” she said as she stood outside her home Monday afternoon.

Taylor had lived in the home for 27 years. She lost a lot of personal possessions but said, “Life is the most important thing.”

Taylor said it was a good thing she was in the den at the time of the fire because her bedroom is on the second floor above the patio where the fire started.

If she had been asleep in her bedroom, she said, there was a good chance she wouldn’t have survived.

The fire destroyed much of the front of the home, and Taylor said there is smoke and water damage throughout the rest of the house.

Kepley said all available city fire units along with firefighters from the Granite Quarry, Spencer and Locke fire departments responded to the call.

No one was injured as firefighters from seven departments were at a home on North Main GQ Street around 11 a.m battling a fire in a large garage.

Late Monday afternoon, South Salisbury Deputy Chief Bobby Burleyson said the cause of the fire is still under investigation.

The brick garage stands alone, about 50 yards from the large, brick home.

The garage suffered significant damage, but firefighters were able to save an antique car, a 1930 REO,  that was in the garage. Another antique car in the garage was destroyed, Burleyson said. Firefighters from seven departments put out a fire in a large garage on North Main GQ Street Monday morning. The garage had significant damage, but no one was hurt. Firefighters were able to save a classic car, a 1930 REO, from the fire.