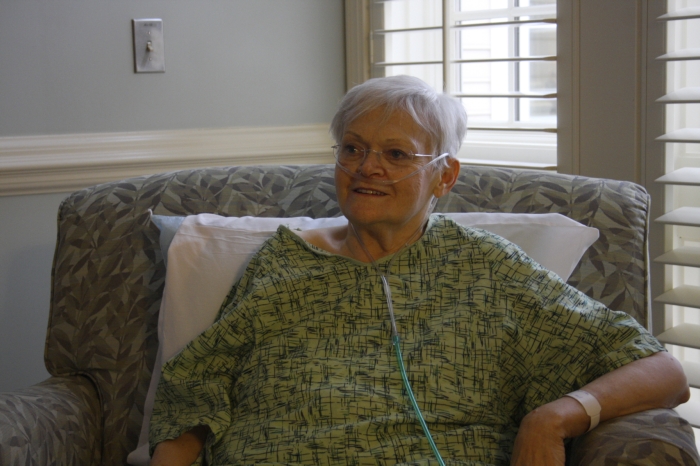 Judy Casey just may be the most chipper hospice patient you’ll ever meet. In October, Judy stopped treatment for myelodysplastic syndrome, a cancer of the bone marrow.

She was receiving care at home, but a fall in November necessitated the need for a higher level of care.

“I had no place else to go but hospice,” says Judy, 73. She arrived at the Glenn A. Hospice House on Nov. 17, and is at present awaiting transfer to a long-term care facility.

Judy has been battling MDS for the past 3 1/2 years. A retired nurse, Judy had taken oral chemotherapy and was receiving blood transfusions. The transfusions eventually stopped working, and were in fact becoming detrimental to her health.

Judy became weak, and eventually had a fall at her home. A native of Lawrence, Mass., she’s lived in Salisbury for 23 years. She had to drag herself to the phone to call for help. After she was released from the hospital, she came to the hospice house.

“In honesty,” she says, “the time I’ve spent here has been the best time in my life. My needs are met physically, spiritually, emotionally and mentally. Oh my gosh, the people here are unbelievable. They have made me feel worthy to be alive. They have given me joy, peace, love and compassion. They are family to me. I feel so safe here, so welcomed.”

Judy had always wanted to be a hospice volunteer, but, like a lot of people, didn’t really know what hospice was all about.

“I had no idea what the word ‘hospice’ meant,” she admits. “Hospice means life. Death is not something to fear. Death is just another step. You have to open yourself up to that.”

She continues, “God lives in hospice. God is hospice. He ministers to each person differently.”

Everyone she’s met, from the nursing staff to the cleaning staff, she says, “have a quality of love and care about them. It is a wonderful, wonderful experience.”

When Judy decided to discontinue treatment, her doctor told her she’d have one to three months to live — but not four months.

Being in hospice, she says, has been beneficial not only to her, but to her family. Her two daughters live in Rockwell and Salisbury, and her son lives in Texas. Her other son is deceased. She has eight grandchildren and one great-grandchild.

Judy spends a great deal of time during the day resting now, and reflecting on her life.

“I always had a close relationship with God,” she says. “I’ve asked God for a favor. I’ve asked him to come and take my hand when it’s time so I will not be afraid. My daughters have accepted my death as a passing into our next journey. I just want others people to know what I know. People should be coming here sooner than they are.

“I feel renewed. I feel wonderful.”

She adds, “It’s just been a beautiful experience. I’ve been blessed the whole way. We all go, and I’m going in such a fashionable way. There is nothing they would not give me. I’m so comfortable, I really am.”

Judy gave her life to the Lord at age 8, and had a near-death experience at age 23.

Judy believes that Salisbury should be honored to have the hospice house, and the people who staff it.

“I don’t think of dying,” Judy adds. “I just think of living.

Skydiving Santa: A magical morning for all ages