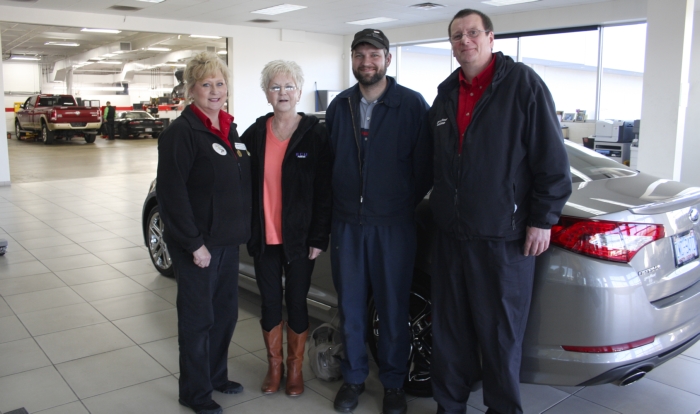 A couple of weeks ago, Sandra Humphries was sitting in her car, getting ready to go to services at Rockwell Christian Church.

Before she exited the car, she decided to put lotion on her hands. When she did so, her wedding ring flew off, nowhere to be seen.

“It was all I could do to go into church,” says Sandra, who lives in Salisbury.

On Friday afternoon, she took her 2013 Kia Optima to Gerry Wood Kia. It was time for the tires to be rotated and have the vehicle cleaned. When Sandra called to make an appointment, she mentioned her missing ring. Employees told her they’d help her look for it.

“My granddaughter and I had turned that car upside down,” Sandra says. “I cried many a tear.”

The ring, of course, was special to her, but even more so since her husband, Ron, died four years ago. They’d been married 44 years, marrying just out of high school. Their anniversary date was Feb. 11, 1966. Ron gave Sandra her ring the year before.

Her original diamond was small but perfect. Ron bought it from a jewelry store near Boiling Springs — they grew up in Shelby — and worked and worked to pay for it, Sandra says. It cost him $125, and he had the ring reset for her after their 25th anniversary, when he’d given her a five-stone band.

The couple had a daughter and son, and three grandchildren. Ron spent his career with Duke Power. One granddaughter is getting ready to receive her degree in nursing, and it runs in the family. Sandra, along with her mother and daughter, were all nurses.

Of course, Ron had the ring insured, and Sandra could’ve had it replaced.

But it wouldn’t have been the same.

Gerry Wood employees knew that, and got to work quickly on Friday afternoon. Luanne Livengood and Chris Gurley, service advisors, both looked for the ring, with no luck. But when Jason Atwell, a service technician, raised the driver’s side seat, he found it right away.

Sandra, of course, was thrilled.

“It made my Christmas,” she says. “The benevolence and kindness they showed to me meant so much to me.”

She adds, “The money would never replace it. I just can’t explain how happy I am.”

“We were just glad to help,” Luanne said. “That’s what customer service is about. It’s not about fixing a car. It’s about making sure the customer is happy and satisfied.”