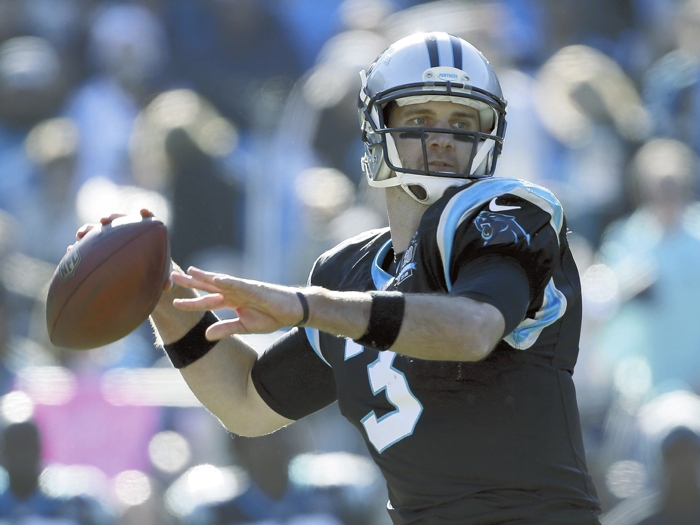 Carolina Panthers' Derek Anderson (3) looks to pass against the Tampa Bay Buccaneers in the first half of an NFL football game in Charlotte, N.C., Sunday, Dec. 14, 2014. (AP Photo/Bob Leverone)

CHARLOTTE (AP) — Greg Olsen has a date with his television set Monday night.

Carolina’s veteran tight end plans to stay up a little later and watch the New Orleans-Chicago game — one that suddenly has major playoff implications for the upstart Panthers.

Despite a 5-8-1 record after a 19-17 win over the Tampa Bay Buccaneers, the Panthers can take over sole possession of first place in the NFC South and position themselves to become only the second team in NFL history to reach the postseason with a losing record in a non-strike-shortened season if the Saints lose.

“It’s pretty crazy,” Olsen said. “But we’re not going to apologize for it.”

Derek Anderson threw for 277 yards and a touchdown, Graham Gano kicked four field goals and the Panthers defeated the Tampa Bay Buccaneers 19-17 on Sunday for their second straight win. The win, coupled with Atlanta’s 27-20 loss to Pittsburgh on Sunday, left the Panthers a half-game behind New Orleans (5-8) in the NFC South.

Anderson completed 25 of 40 passes and improved to 2-0 as a starter in place of Cam Newton, who missed the game while recovering from a car accident Tuesday that left him with two fractures in his lower back.

Both of his wins have come against Tampa Bay.

“I started thinking through all the plays and seeing pictures in my mind,” said Anderson, who improved to 20-25 as an NFL starter. “I saw the same things over and over and said to myself, ‘Geez, dude, go to bed.’ I turned the Golf Channel on to watch the Australian PGA. I fell asleep on the second or third playoff hole.”

Olsen tied a career high with 10 catches for 110 yards, and rookie Kelvin Benjamin had eight grabs for 104 yards.

“We have a ton of confidence in (Anderson),” said Olsen, who tied a career high with 10 catches and had 110 yards. “There is no scaling back on playbooks or installation. This week’s preparation went on like it would normally.”

In fact, on two read-option plays, the Bucs completely ignored Anderson. But he got the crowd pumped when he eluded pressure and rambled for a 9-yard gain in the first quarter and signaled for a first down.

Newton, dressed in black sweats and a long-sleeve black shirt, roared his approval on the sideline, clapping and smiling as he watched the replay on the video board.

“Someone told me I wouldn’t do it,” Anderson joked. “I said that if I ran for a first down, I promise you I’ll do it.”

Josh McCown threw for one touchdown and ran for another to lead the Bucs (2-11). He fumbled twice and was intercepted once by Luke Kuechly on a last-second heave from deep in his own territory.

Carolina won despite another week of settling for field goals instead of scoring touchdowns.

The Panthers, ranked 27th in red zone offense coming in, reached or started in Tampa Bay territory on all 10 drives, but managed just one touchdown and settled for five field-goal attempts.

The game turned on the opening drive of the second half when Carolina defensive ends Charles Johnson and Mario Addison converged to sack McCown at the Tampa Bay 4, jarring the ball loose. Kawann Short recovered, setting up a 2-yard touchdown pass from Anderson to Jerricho Cotchery to give Carolina a 16-10 lead they would never relinquish.

The Panthers had plenty of chances of build on that lead in the third quarter, but struggled to do so.

Jonathan Stewart fumbled at the Tampa Bay 3-yard line on Carolina’s next possession and Akeem Spence recovered, keeping it a one-possession game. Two other Carolina drives faltered just outside of field-goal range.

The Panthers eventually got a 38-yard field goal from Gano to push the lead to 19-10.

The Bucs were limited to a combined minus-2 yards on their first four possessions in the third quarter.

“That was really what titled the game in the third quarter — that slow start,” McCown said.

Tampa Bay finally broke through late in the fourth quarter. McCown led an 11-play, 80-yard touchdown drive, rambling 16 yards for the score with 3:11 left in the game.

NOTES: Doug Martin ran for 96 yards on 14 carries, most of those coming on a 63-yard jaunt in the first half. … Tampa Bay entered without three defensive starters and lost defensive tackle Gerald McCoy to a hyperextended knee late in the first quarter. He did not return. … Stewart’s fumble was his first since 2010.

COLUMN: Panthers pulling off a rally