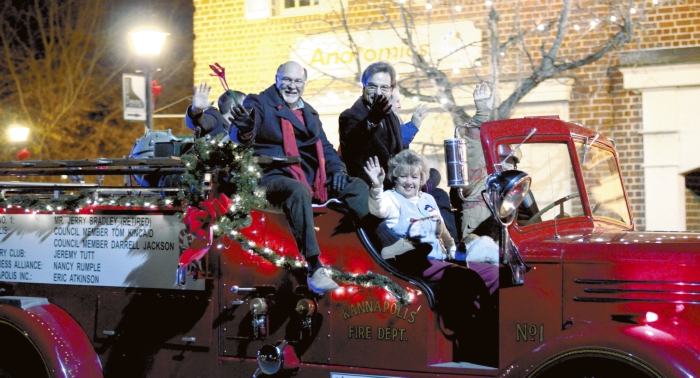 KANNAPOLIS — After wet weather last year dampened the crowd’s enthusiasm — literally — locals made up for it by turning out in force for the annual Kannapolis Christmas Parade of Lights.

At dusk Saturday, a full hour before the posted 6 p.m. start time, parade-watchers were already lining up two and three deep on parts of South Main Street, and claiming prime spots along West Avenue.

“We’ve been here every year,” said Sandra Hilton, standing with friends on the porch of the Campo & Associates office on South Main Street.

Her husband, Gerald, works there. “And we crashed their party!” one of their friends quipped.

Gerald said the local high school marching bands are his favorite part of the parade. They gather every year to watch the parade from the porch.

This year, their granddaughter was set to march in the parade with her dance school, Sandra said — making the event even more special.

Elsewhere, on South Main and West Avenue, those who arrived early got prime spots from which to watch from the beds of pickup trucks, or the backs of SUVs.

Darrell and Angela Cline, of Midland, brought their grandkids to the parade and chose to sit closer in hopes some of the parade participants might hand out candy or treats.

“There’s not too many night parades,” Darrell said, which is why they made it a point to come to this year’s Kannapolis event.

Granddaughter Payton Brown, who’s in middle school, also said watching the high-school bands is a favorite part of the parade.

Darrell and Angela said their favorite part is watching the kids enjoy the parade.

Brenda Drye, of the Cabarrus Events Association, one of the parade’s organizers, said 126 entries were registered for this year’s parade.

Each entry had some kind of illumination — from strings of bulbs on band members’ instruments to floodlights and rows of winking and sparkling lights on floats.

This year’s “special guest” float was manned by staff members of the What-a-Burger restaurant on South Main Street in the Midway community. The drive-in’s Midway location is celebrating its 50th anniversary this year.

Following cars carrying Mayor Darrell Hinnant and other members of the Kannapolis City Council, a piece of Kannapolis history rode in the parade — seen by many for the first time in decades.

The city’s first fire engine, a 1942 Mack, was driven in the parade by retired Kannapolis firefighter Jerry Rumple.

Rumple, who worked as a firefighter in Kannapolis for 26 years, said the truck was bought brand-new in 1942 by Cannon Mills Co.

Rumple also said he was possibly the last to drive Engine No. 1 on a call — a fire at a local laundry around 1968.

“The last time it went out on a call … it was bad. Rain, sleet, the whole deal,” Rumple said, sitting with others at the fire engine after it finished its run in the parade.

Kannapolis City Council members Tom Kincaid and Darrell Jackson rode with Rumple on the engine, along with representatives from the Kannapolis Rotary Club, Kannapolis Business Alliance and Downtown Kannapolis, Inc.

“It’s great that we can bring a part of this city’s history back and share it with people once again,” Kincaid said. “The world’s changing so fast, so it’s good to be able to honor our past, especially the history of the mill that built this city.”

“I tell you, it was an honor to be able to do this,” Rumple said.

Another Kannapolis tradition: the wave of cheers as A.L. Brown High School’s marching band heralded the approach of Santa Claus to round out the parade.

Drye said this year’s event is the first time in recent years that horses have been a part of the Kannapolis Christmas parade.

Cabarrus County’s government access Channel 22 recorded the parade, which will be televised on local cable television in coming days.