COLUMN: Panthers pulling off a rally 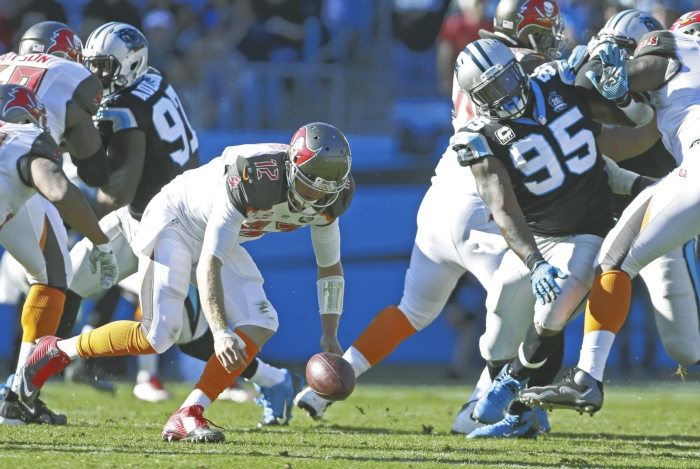 CHARLOTTE — Like that C-student everyone knew in school, the Panthers are attempting to pull off the rally of all rallies as time winds down in the semester. Carolina did just enough, and had a few things go its way, to put a 19-17 game against Tampa Bay in the win column.

The Panthers (5-8-1) are in first place in the NFC South. That’s right. The Panthers, who went winless in seven games are on top of the division standings and the owners of a playoff spot, at least for now. Whether they stay there depends on what happens Monday in Chicago when the Bears host New Orleans (5-8).

You know what , though? Carolina’s fine with being where it is despite its obvious struggles this season.

“We’re not going to apologize,” tight end Greg Olsen said. “Its a hard game to win. The NFL is not easy. Sometimes things go crazy. Last year, we had a 10-win team in our division not make the playoffs.

“So, we’re not going to apologize for winning our division. It’s not easy to do, but we have a long way to go before we get there.”

Using the season as a semester metaphor, the Panthers were staring down the barrel of a failing grade just past the midterm. That seven-game winless streak put them even further behind. They are trying to cram just enough work into the final four weeks to scrape by with a passing grade and a playoff berth.

Luckily, nobody else in the division is doing anything to screw up the curve.

Carolina dominated that quiz in New Orleans last week, and they got the assignment done against Tampa Bay.

Those pesky red zone issues resurfaced Sunday. Carolina moved the ball with ease on its first possession of the game. On the first play of the game, Philly Brown took the ball 17 yards on an end around. The Panthers didn’t face a second down until after a loss of seven yards by Derek Anderson on a fumble on the fifth play of the drive. They marched 70 yards in eight plays with a steady dose of Jonathan Stewart and a pair of passes to Olsen and Kelvin Benjamin.

The drive, however, stalled at the Tampa Bay 14. Graham Gano kicked a field goal.

This happened four times Sunday against the Buccaneers.

Each drive was like reading multiple stories by the same author. Despite a different start, the end was pretty much the same. In nine drives into Tampa Bay territory, the Panthers scored one touchdown. The offense, however, barely gets credit because of Charles Johnson’s strip-sack at the Tampa Bay 4.

Olsen said the team still has to address the scoring problem, among other things, and can’t let it slide just because of Sunday’s victory.

“There’s a lot we left on the field out there,” Benjamin said. “We just have to get in there, watch film and correct the mistakes.”

A rally for a passing grade can’t happen without a touch of luck either. The Panthers found an extra credit opportunity along the way and went all in.

A challenge by head coach Ron Rivera, who is not the best at challenging calls, overturned an incomplete pass by Tampa Bay quarterback Josh McCown incomplete. It became a fumble recovery by safety Roman Harper. Carolina had the ball.

Two plays later, Anderson’s pass to Olsen slipped out of the tight end’s hands and went right to linebacker Orie Lemon for the interception. The play was negated by a roughing the passer penalty on defensive end Larry English. Panthers kept the ball and got the first down on top of it.

On the same drive, Carolina faced a third-and-7 from the Buccaneers’ 27. Anderson’s pass to Brown was low. Alterraun Verner went to the turf to scoop it up for the pick. He dropped it.

Gano followed that play with a 45-yard field goal for a 19-10 lead with eight and a half minutes left in the game.

“We had a big win today, obviously, playing against Tampa Bay in the division,” head coach Ron Rivera said. “We have Cleveland coming in, and we have to get things going in the right direction and continue to do things that we need.”

Jonathan Stewart had his share of runs big and small. He also fumbled twice, losing one. As a team, Carolina averaged less than four yards per carry.

The Anderson-to-Olsen and Anderson-toBenjamin connections were working. The veteran tight end and rookie receiver combined for 18 catches and 214 yards. They also knew where the cans were to get those first downs.

Problems in the red zone still persist. Carolina moved the ball well on its first drive of the game only to stall and kick a field goal. Carolina had the ball in Tampa Bay territory nine times — four in the red zone. It came away with only one touchdown.

Doug Martin broke out the big one, on the second play of the Buccaneers’ first drive of the game. The Panthers had more trouble with Charles Sims than it did Doug Martin.

Josh McCown completed less than 50 percent of his passes and was under a lot of pressure. That Charles Johnson strip-sack inside the Tampa Bay 10 was highlight of the Panthers fiery start to the second half.

Graham Gano went 4-of-5 on field goals. His miss from 51 yards could have been costly. It wasn’t though. All three of Brad Nortman’s punts ended up at or inside the Tampa Bay 10.