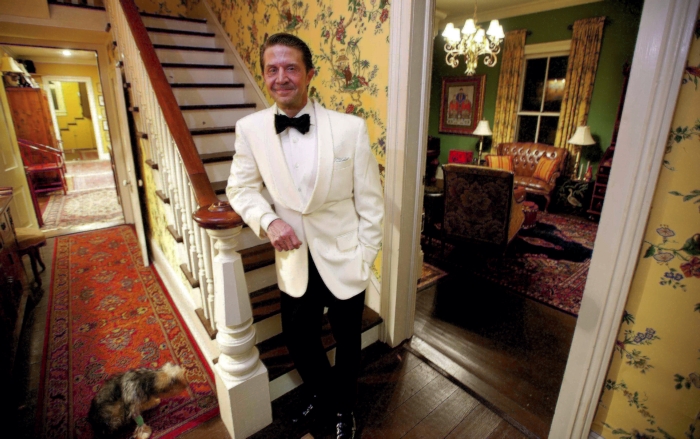 JON C. LAKEY / SALISBURY POST Rick McCombs shows off his wide array of vintage dinner jackets. McCombs is going to be wearing white dinner jacket while playing "Rick" in the Casblanca themed Big Band Bash to be held at Catawba College in January.

SALISBURY — When he puts these dinner jackets on, Rick McCombs can’t help but throw around words such as “snazzy,” “spiffy” and “jaunty.”

McCombs has about 10 vintage dinner jackets in his closet, things handed down to him and accepted gratefully or coats he picked up a trendy thrift shops. It’s poetic or maybe cinematic justice that McCombs, a guy named Rick, will be wearing his white dinner jacket to Salisbury-Rowan Symphony’s “Casablanca at the Big Band Bash” fundraiser Jan. 10.

Look for McCombs strolling around Catawba College’s Hedrick Little Theatre lobby and Peeler Crystal Lounge all that night as though he were proprietor of Rick’s Cafe Americain Cafe in Morocco.

The “Casablanca”-themed evening Jan. 10 will include Maestro David Hagy and the Band, playing a concert and warming up the crowd from 7:30-8:15 in the theater before moving over to the Peeler Crystal Lounge for dining and dancing. Livingstone College’s School of Culinary Art, headed by Vivian Ray, will cater the event.

Betty and Jim Carli are co-chairs for the Big Band Bash, which also will include an appearance by the “Andrews Sisters.” Tickets are $75, which can be purchased online at www.salisburysymphony.org/tickets-page. For more information, contact Linda Jones at the symphony office, 704-637-4314.

McCombs, owner of Sidewalk Deli, picked up his white dinner jacket when he was in New Orleans awhile ago meeting friends Ashley and Samantha Haspel, grandchildren of the late Irvin and Bert Oestreicher of Salisbury.

The jacket was hanging in a second-hand thrift shop on Magazine Street called the Neophobia. It had been a rental jacket in its day, which actually intrigued McCombs, who envisioned the scores of New Orleans parties the jacket must have attended. Ah, the stories it could tell.

But two of McCombs even more cherished dinner jackets once belonged to Irvin Oestreicher, who always dressed nattily in his capacities as a leading Salisbury businessman and devoted cultural advocate. Oestreicher’s department store, known for its fine merchandise, flourished on South Main Street for much of the first half of the 20th century.

McCombs became close friends with the family — the Bert’s Club sandwich at Sidewalk Deli is named for Bert Oestreicher — and it was about four years ago when he and Ashley Haspel, visiting for the summer, were going through an upstairs closet of the Oestreicher home on South Fulton Street.

They stopped to appreciate Irvin’s colorful dinner or tuxedo jackets.

Ashley was at first interested in the jackets until realizing they aren’t really flattering on a woman. She yelled down to Rachel Oestreicher Bernheim, her mother, and asked whether McCombs could have them.

Downstairs, they all realized if Rick were ever going to wear the two dinner jackets and a 1970s-era suit, some major  restyling and taking in at places would have to occur.

Irvin Oestreicher, who friends called “Big,”  was a 43 long, while McCombs is a 38 regular.

McCombs credits Dee’s Alterations for magically reworking the jackets and suit to his measurements.

As he slips on a red dinner jacket once belonging to Oestreicher, McCombs said it reminds him of an old Italian restaurant. The rich fabric is raised and has the look of vintage wallpaper.

McCombs also likes the satiny sheen of Oestreicher’s Carolina blue dinner jacket, and he knows it takes courage to wear the suit, which is a velveteen fabric, but if anyone can pull it off, McCombs can.

Those were exactly the words Jean Owen used this fall when she presented McCombs with her late husband Foster’s top hat, jewel-topped cane and silk cravat. Only he could pull it off, she said.

“I was fortunate to be around men who liked to dress,'”McCombs says, getting back to Oestreicher’s suit. “I love the way it feels.”

McCombs and his dinner jackets have been to many Salisbury events, such as the Heart Ball, Winter Bloom and Big Band Bash. At last year’s bash, he wore a black-and-white dinner jacket going back to his days as a Catawba College student.

He thinks it was there friends lovingly gave him the nickname of “Lounge Lizard,” or “Double L.”

McCombs is a University of North Carolina fan, so he has no problems with the blue coat, either.