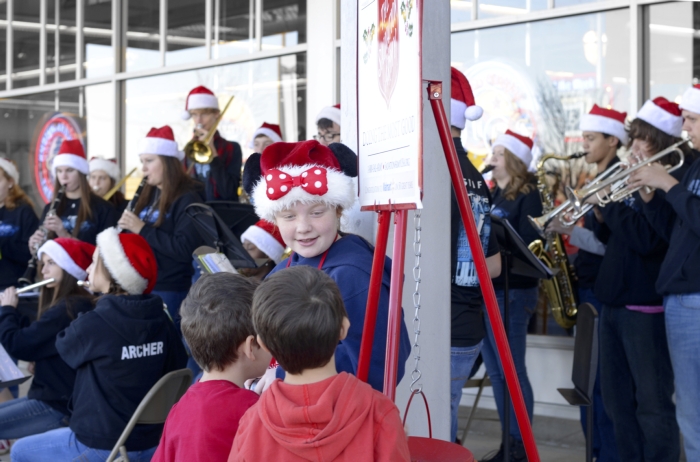 Hugh Fisher/For the Salisbury Post Shelby Harrison, center, thanks children for their donation to the Salvation Army as members of the West Rowan High School marching band play carols outside Old Navy in Salisbury.

SALISBURY — It’s a scene right out of a Christmas movie: a band outside a store, gathered around a red Salvation Army kettle, playing carols as shoppers drop donations into the bucket.

For four years, students from West Rowan High School have played in all kinds of weather.

This year, they played not only for passers-by, but for a small crowd of locals and friends who’ve made the event a tradition.

It’s the fourth year of the fundraising event, which Nooner organized as a way to help give back to the Salvation Army here in Salisbury.

Wearing Santa hats and bundled up against the chilly afternoon, members of the Marching Falcons played many Christmas favorites, including “Hark! The Herald Angels Sing,” O Christmas Tree” and “The First Noel.”

Other holiday songs in the medley included “Frosty the Snowman,” “Rudolph the Red-Nosed Reindeer” and an increasingly up-tempo version of “Jingle Bells,” with Nooner challenging her bandmates to see how quickly they could play.

“I love it,” said Major David Craddock, of the Salvation Army in Salisbury. “I think it’s great that the high school youth are learning what it means to help others, to give of themselves.”

“I used to be in one of those bands that was out playing at the kettles,” Craddock said.

“From my experience, when you have music like that, it draws people’s attention. It’s a win-win type of situation,” Craddock said.

Over by the kettle, Shelby Harrison, a sixth-grader at West Rowan Middle School, wore the trademark red Salvation Army apron and held a bell, which she rang during “Jingle Bells” and some other songs.

Aside from thanking donors and wishing people a merry Christmas, Harrison also passed out candy canes to kids.

For Nooner, who’s set to graduate from West Rowan in the spring, this will be her last Christmas event as a student, but probably not her last one of all.

In fact, several West Rowan alumni were on hand to play Saturday, she said.

The Christmas mini-concert for the Salvation Army is an all-volunteer event, according to Nooner’s mother, Cindy.

“They actually can earn an hour of community service time for playing, but they practice a ton,” Cindy Nooner said.

Cassidy said younger students will have to step up and organize the Salvation Army event after she graduates, but she’ll still be working to support it.

And her younger sister, Camryn, a freshman at West Rowan, was back playing alto saxophone this year – something she’s done for several years.

Payton Robertson, another freshman, plays trombone for the Marching Falcons. She said she’s glad to be a part of an event that raises money for people in need during the Christmas season.

As shoppers paused to clap for the band, and dropped donations in the kettle, Payton’s mother, Dana Robertson, said the music had brought holiday cheer.

“It’s great to see these kids giving up a Saturday afternoon to do this,” Dana said.