Salisbury pays tribute to veterans with Wreaths Across America 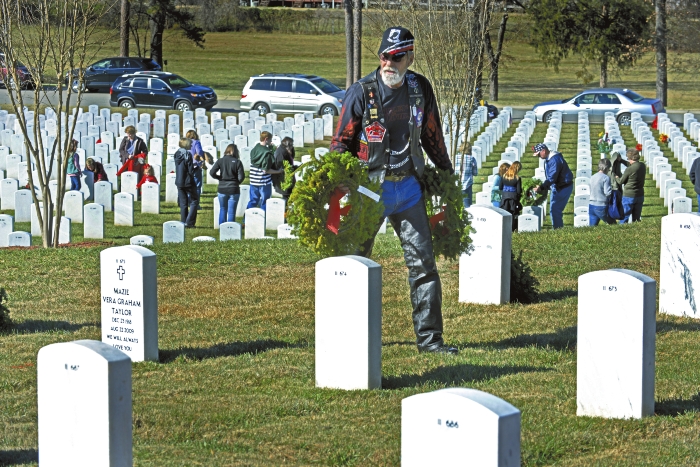 Ron Tuttle from Winston Salem placing Christmas wreaths on the graves of veterans at the National Cemetery Annex during the Wreaths Across American Day. Tuttle is a member ot Rolling Thunder Chapter 6. photo by Wayne Hinshaw, for the Salisbury Post

A somber silence on Saturday swept over Salisbury’s National Cemetery Annex on Statesville Boulevard, as dozens gathered for the annual Wreaths Across America. The national cemetery annex was one of two locally and one of more than a hundred national cemeteries that participated in the event.

Wreaths Across America at the cemetery began with a moment of silence. Spectators stood quietly as family members of deceased veterans and soldiers injured in battle placed wreaths next to several different military flags, in the middle of a patch of grass.

One of the multiple pairs of people presenting wreaths were Gold Star parents Janice and David Badgley. The “Gold Star” title was one that applied to many of the presenters. The term is used to denote immediate family members of a solider killed in combat.

Scott Badgley, an 18-year Marine Corps Veteran and Janice and David’s son, died in 2009 from complications after receiving rabies and deployment vaccinations.

Scott’s death was difficult to deal with, Janice said.

“The worst part of what happened is when we buried Scott, Steve had been home for ten days for R and R,” Janice said. “We had to send him back to the war. So we buried one son and then sent the other back to Iraq and Afghanistan. It was horrible.”

David said his family participates in Wreaths Across America because of soldiers’ daily sacrifices.

“We just know from the service of both of our sons how much these men and women do for our country to protect our freedoms,” David Badgley said. “It’s the least we can do to give them the honor and respect they deserve. There are times in our nation’s history when that didn’t happen.”

David and Janice placed a wreath during the ceremony for the U.S. Coast Guard. One wreath was placed for each service branch, one for the Merchant Marine and one for Prisoners of War and those Missing In Action.

Still, throughout the ceremony, the throng of spectators remained silent. The only audible noise was instructions from the color guard, led by 16-year-old Zach Fleming, a member of the North Carolina 162 Iredell Composite Squadron Civil Air Patrol.

Once the formal ceremony ended, local Wreaths Across America coordinator Ronnie Faggart spoke to the crowd about the value of the military’s work.

“The United States of America was founded on the ideals of freedom, justice and equality,” Faggart said. “Our nation stands as a shining beacon of liberty and freedom to the world. We all, each and every one, have the right to succeed, but we also have the right to fail at whatever endeavor we wish to pursue.”

The final part of Saturday’s event was for attendees to place wreaths on graves of soldiers buried in the cemetery. In total, Faggart said there were 924 wreaths to be placed. With more than 5,000 total graves, Faggart said he’d like to improve on the number of Wreaths for next year, as this year was the lowest total number of wreaths he’s seen at Salisbury’s event.