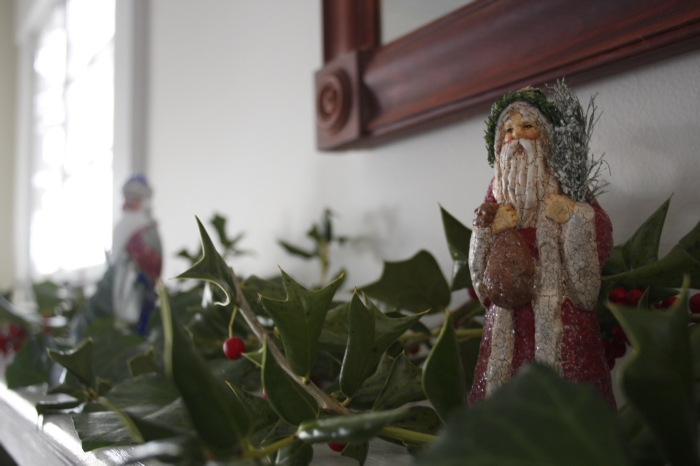 What’s that, you ask?

He can be a scary-looking thing, too — he’s clothed in a tattered coat with patch pockets, a low-slung hat, and mask for his face. A giant sack, and don’t forget those dang switches.

The Belsnickel appeared sometime before Christmas — rattling windows of homes to startle children. There was an element of pranks to the visits, Freeze says.

Most likely, kids would straighten up after a visit from Belsnickel.

As a historian, Freeze is constantly seeking out continuities among the people who have settled in a particular area. “In writing about Rowan and Catawba counties, I have looked for remnants of German consciousness.”

Freeze is the author of two books about Catawba County, with a third to be published in 2015.

One such remnant he’s been seeking is the story of Belsnickel. At one time, the tradition took place in Pennsylvania. Just this week, Freeze found evidence of the tradition in Hickory about 1910.

He’s attempting to start his own Belsnickel tradition in conjunction with St. Nicholas Day parties that typically take place around Dec. 6, St. Nicholas Day. Freeze planned to throw a Belsnickel party for his history majors on Dec. 5, but alas, the student who was to play Belsnickel came down with a stomach virus. Freeze will attempt another full-blown Belsnickel party next year. He did give his students paper bags (or paper pokes) full of tangerines, raisins and candy canes — a local tradition with which some were not familiar. He sent them away with switches, too.

“I think Salisbury should have a festival or some sort of Belsnickel commemoration,” Freeze asserts. “Clyde is my ally on this.”

Someone — we’re assuming this could be Clyde — can dress as a person in disreputable clothing, boots and a slouchy hat. Then there would be the distribution of small treats — or switches, as the case may be.

St. John’s Lutheran Church was the first congregation to put up a Christmas tree in 1871, and other local Lutheran congregations quickly followed suit, he says.

He’s read about presents in the 1870s or so because of advertisements in the Carolina Watchman newspaper.

He’s even found a suggestion of Belsnickel in Christmas songs.

You know the line “You better watch out” from “Santa Claus is Coming to Town”? That’s the lightened-up version of the idea of Belsnickel, Freeze says.

You better watch out, indeed.