Wineka column: The silence after an explosion can be pretty loud 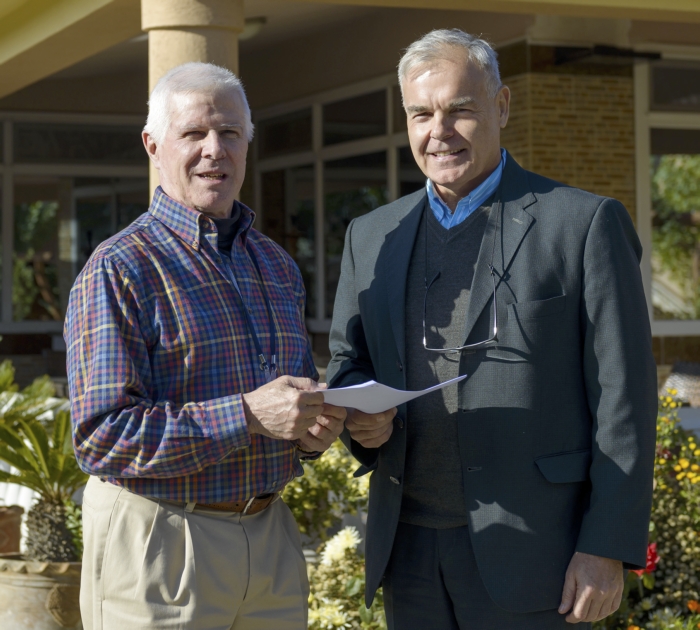 Submitted photo In a photograph from earlier this fall, Will James of Salisbury, left, stands with Frank Ehling, a German national and work colleague who was killed Thursday in a suicide bombing in Kabul, Afghanistan.

SALISBURY — A world away, in Kabul, Afghanistan, Frank Ehling found a seat at the end of a row in a packed auditorium of the French Cultural Centre.

The center sits on the grounds of a French-run high school, and Ehling, a German national working in Kabul, had come to see a musical play under the title, “Heartbeat: Silence After the Explosion.” The production was written and being performed by the local Azdar Theatre Company.

Not long after Ehling had taken his seat Thursday, a young man, thought to be only 16, walked into the auditorium, stopped close to Ehling and blew himself up. The explosion killed Ehling — he and the bomber were the only fatalities — and wounded 10 Afghan citizens.

Word quickly passed through the streets of Kabul and reached the compound where Will James of Salisbury and Ehling had shared an office. They were part of a U.S.-based private contractor working on a mining initiative designed toward making Afghanistan more self-sufficient and less dependent on drugs as its chief industry.

Over more than a year of working together, the men had become close — this kind of environment tends to make friendships stronger, when you have to travel place to place in bulletproof vests and cars. They often dealt with the same ministry of mines, and today James and Ehling were supposed to travel together to a meeting about their project.

As you can imagine, Will James is beside himself with grief and concern.

“I can’t wrap my arms around the evil,” his wife, Mary Miller James, said in Salisbury Friday.

Because the company’s chief of party administrator was in the States this week, Will James was serving as acting chief of party in Kabul when the explosion took place. He had to contact the German and U.S. embassies after the bombing, and also Ehling’s family.

The ironic part of the attack was, of course, that the play’s storyline concentrated on the aftermath of a bombing, looking at it through the reincarnated souls of its victims. The Taliban claimed responsibility for the attack, calling the play immoral and held under the sponsorship of “foreign invaders.”

Will James is an energy attorney and regulatory specialist, and this is the second occasion he has worked an extensive period in Kabul, although for different companies each time. Ehling was involved more in the community relations aspects of their work, and it probably was a reason he attended Thursday’s play — he knew many of the people who would be there.

Ehling, 55, had been in Kabul since June 2013. Over the 18 years prior to that, he had worked in places such as  Georgia, Belize, Poland, Spain and Palestinian territories.

In his regular chats with Mary in Salisbury, Will often talked about Ehling, and she felt as though she knew him. Knowing Ehling had grown up in East Germany — the old German Democratic Republic — Will had once asked Frank to write down in English some of his memories of when the Berlin Wall came down.

The world celebrated the 25th anniversary of that historic event in November. About that time, Will had sent home what Frank had written, along a photograph of them together in Kabul.

Ehling said in his brief memoir for James that the wall’s demise signified three important turning points in his life: the end of the Cold War and the Warsaw Pact, the beginning of Germany’s reunification and the first day in his life he was able to experience personal freedom.

“It’s not easy to describe and difficult to understand,” Frank said, “the intimidations, the threats and the restrictions which were there every single day in your daily life, for people who didn’t experience the communist regime themselves.”

Ehling was watching Gunter Schabowski’s press conference around 7 p.m. Nov. 9, 1989, when he proclaimed the new travel law for GDR citizens — that they could travel without restriction immediately.

Ehling jumped into his car and drove to the border station of Bornholmer Brucke in East Berlin. It was already around midnight and thousands of people were there. During the night, Ehling said, he managed to cross the border into West Berlin.

“I can still remember,” Ehling wrote, “the night I walked through the Berlin Wall, a symbol for the repression of all people in the GDR and also of my restricted, personal opportunities. It was like I got released from the prison after I was innocent and detained for 30 years.

“It was an unbelievable feeling of joy —the knowledge that something new was about to begin that would change your whole life. I will never forget it my entire life. This was THAT day for me.”

Mary Miller James had hoped to take the written memoir, the photograph of Will and Frank together and a piece of the Berlin Wall she had received from a journalist friend and fashion the elements into a framed keepsake. She still plans to do that.

Ehling’s death is another example of the small world we live in and how something happening so far away can hit us like a thunderbolt.

It’s insensitive to say,  but we probably don’t pay much attention any longer when a suicide bombing happens in Afghanistan and the main casualty is someone from a foreign country.

But we were friends with Frank Ehling. We just didn’t know it.