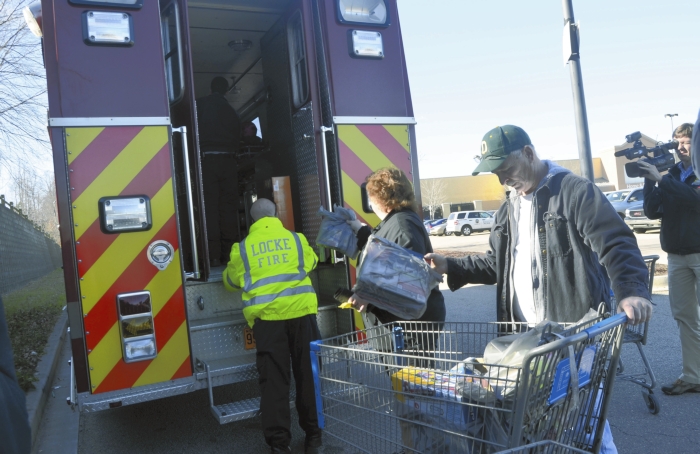 Locke firefighters and members of the Rowan County Fire Marshal's Office load up toys outside of Walmart for a local family who lost nearly everything in a fire at their Hallmark Circle home. The fire personnel were ready to pay for the items until the Walmart manager said the store would take care of it. Firefighters used money they'd collected to buy gift cards for the family. Shavonne Walker/Salisbury Post

Katelyn McCubbins was overcome with emotion Friday and the tears flowed freely as she stood several feet from the remnants of the log cabin she shared with her boyfriend, Juan Herrera

The couple lost nearly all of their belongings in a fire that destroyed the small home on Hallmark Circle, off Hallmark Estates Drive, in southern Rowan County.

The fire began after 5 p.m. in a wood fired hot water heater and the couple were not home at the time. McCubbins’ brother, Tyler, who lives next door in a larger log cabin, saw the flames and called 911.

He managed to get a few things from the house including some wooden furniture pieces that he’d made for his sister and a few clothing items, but much of what was in the home was destroyed. The fire even consumed some Christmas presents for Herrera’s 4-year-old son Cayden, who was also not at the home during the fire.

When fire personnel learned the young couple lost much of what they owned, they decided before heading back to their respective stations they would take up a collection.

Locke firefighters and members of the Rowan County Fire Marshal’s Office spent a couple of hours shopping for toys and household items for the family on Friday morning at Walmart. As they went through the store several customers and employees became aware of what they were doing and began putting money in their hands.

“When we got to the counter, the Walmart manager said ‘it’s on us,’ “said Locke Fire Chief Rusty Alexander.

The firefighters quickly decided they’d used the money they’d collected to purchase gift cards for the family. The firefighters loaded up their fire truck and headed back to Hallmark Circle, this time to deliver some Christmas goodies.

Fire Instructor Deborah Horne explained to Katelyn about the donations and McCubbins could be seen crying in the veteran firefighter’s arms.

She said the firefighters asked them on Thursday what they liked, but she never imagined they’d return with so much. The firefighters even purchased a Christmas tree.

“I don’t know what to say, but I’m so thankful. We live in such a good community,” she said.

She was also thankful to her brother who pulled a wooden chest and a small wooden keepsake box he’d made for her out of the home. He also rescued just three of Caden’s Christmas presents, a shoe rack that belonged to Katelyn, her laptop. But ever grateful, Katelyn said her brother was able to get some clothes, but unfortunately they were clothes that didn’t fit anymore and she was going to donate.

Her most treasured items that remarkably didn’t burn was a plastic tote filled with pictures of her mother who died two years ago. The tote was under a sink and all of the pictures inside were not damaged. Her bible that was left siting on her headboard had a little water damage, but remained unburned.

“Everything else around it was burned,” she said of the bible.

Walmart also provided the family with dinner for the night, Horne said.