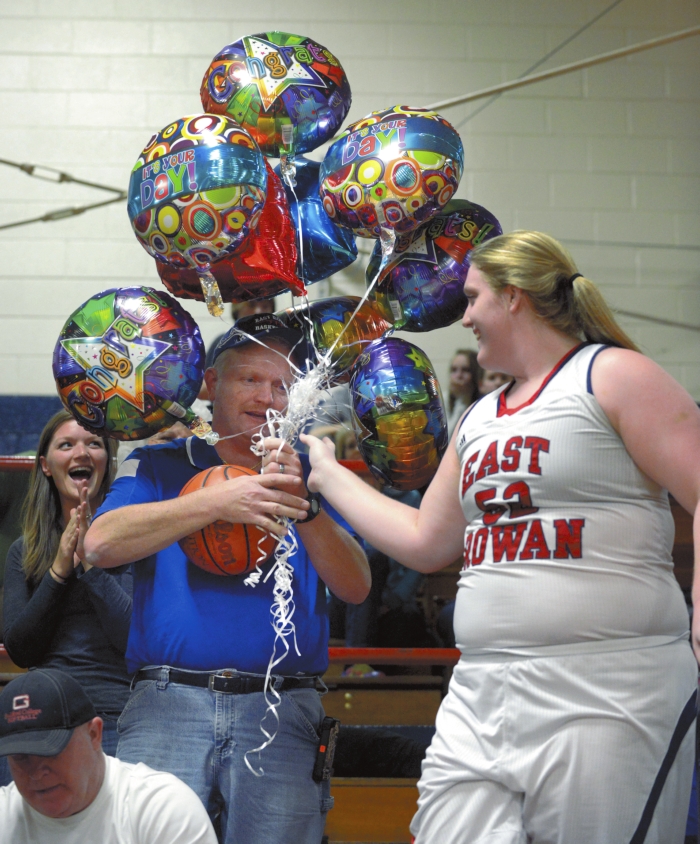 Wayne Hinshaw Kelli Fisher (52) gave the game ball and balloons to her father, Mark Fisher, after scoring her 1,000th point.

GRANITE QUARRY — East Rowan senior Kelli Fisher enjoyed a most productive game Friday night. First the 6-3 center took care of a milestone then she manhandled the visiting Northwest Cabarrus Trojans in a 70-35 rout.

The four year varsity starter, headed for UNC-Asheville next year,came into last night’s game needing just four points to reach to 1000 point career mark. She took care of that midway in the first period. Then she proceeded to rack up 25 points and 19 rebounds to lead her team to the South Piedmont Conference win. As usual she remained very humble.

“I could not have done any of this without God, my coaches and my teammates,” Fisher said. “I feel like it just signifies a good team and being able to work with my teammates.”

Fisher’s 1000 point career mark came with 4:35 left in the first quarter on a layup after a perfect feed from Amani Ajayi. The game was stopped briefly for Coach Danielle Porter to present her with a commemorative game ball while the crowd gave her a standing ovation.

“I just love coaching her,” Porter said of her star center. “But everybody does. She is probably the most popular girl in Granite Quarry and an awesome young lady. Yet she never worries about points, she just wants to help her team win.”

Fisher could easily have set the career mark  the previous night in a non-conference win at Salisbury High. But with a big lead,, Porter pulled Fisher from the game just two baskets shy of the 1000 mark. That way she could celebrate the moment in front of the home crowd last night.

The game itself last night was never in doubt as East (5-1, 3-1) used pressure defense and the inside play of Fisher and Ajayi to roll up a 22-4 lead on the winless Trojans. By halftime it was 39-13 as Fisher had 19 points and 16 rebounds. To their credit, the young Trojans (0-7, 0-4) battled East almost on even terms in the third quarter but the deficit still continued to grow. NWC got the score under 25 briefly but when guard Shelby Lowe converted a steal into a lay-up plus one, East was up 62-39.

“We are just very young but we are growing,” Trojan Coach Lamont Johnson stated. “We just could not stop (Fisher). She is a huge force to reckon with. But we are going to get to where we need to be by the end of the season.”

In addition to Fisher’s big night, Ajayi had her best effort of the season with 16 points. Shenell Pharr had 5 points, 7 rebounds and six steals while Shenique Pharr and Shelby Benge also had 5 each. Savannah Lambert and Joy Smith topped the Trojans with nine each.

Porter noted her team had a couple of lapses on defense and some turnovers but she was definitely happy with the 35 point win. “We always emphasize to the team that we don’t change what we do regardless of who we are playing,” she said. “We just try to do what we do best.”

Right now that would primarily involve feeding the ball inside to Kelli Fisher.