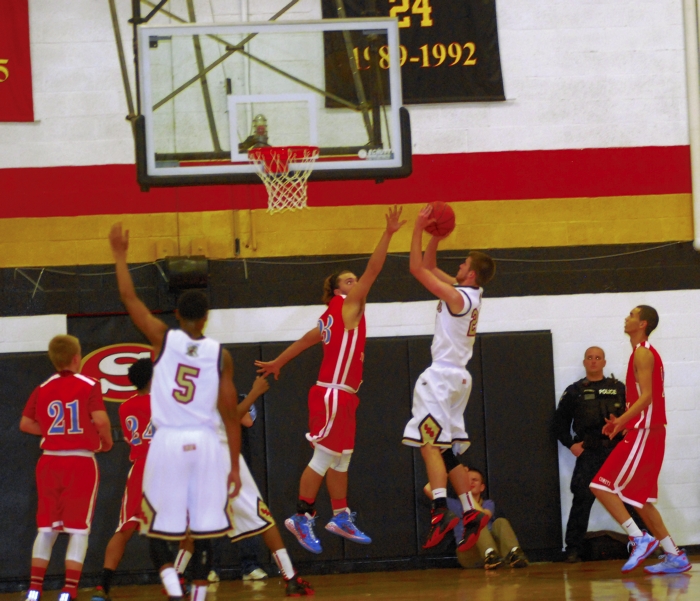 SALISBURY — Salisbury turned away every run North Stanly made on Friday.

When the Comets challenged the Hornets at the start of the second quarter with a 12-0 run, the Hornets regained control to retake the lead with a basket by DeShawn Troutman off a turnover. Salisbury slowly and steadily pulled away for a 73-50 win.

The Comets went into Friday’s game unbeaten in four games with three of the wins by more than 20 points. The Hornets (6-2) have two wins this week by a combined 50 points.

“It’s just one more step. We got a long way to go,” Salisbury head coach Jason Causby said. “With the way our conference is aligned, we won’t start playing league games until after Christmas. We’re lucky.”

The Hornets are trying to have a good run through this slate of nonconference games and the Sam Moir Christmas Classic before they open Central Carolina Conference play Jan. 9 against East Davidson.

On Friday, the Hornets picked up where they left off Wednesday against East Rowan. The defense forced turnovers with a pressure defense as the team built a 10-point lead.

The Comets (4-1) answered by coming out firing at the start of the second quarter. Luke Gibson swished a 3-pointer and a pair of jumpers from inside the arc to push the Comets to a 21-17 lead in the first half of the period. Gibson finished with a game-high 21 points that included  four 3-pointers.

Wes Fazia and the Hornets came right back at their foe. Fazia’s baseline jumpshot with 4 minutes, 22 seconds left in the half got it rolling. He scored six points as the Hornets went on a 12-3 run for a 29-24 lead at halftime.

The start of the third quarter was the same. Gibson and Dangelo Reid had a flurry of buckets as the Comets cut their deficit down to 33-31 less than three minutes into the half.

“It was just one of those things,” Causby said. “When they made their run, we were able to to turn them around.”

Fazia and Alex Yang both had a couple of big buckets as the Hornets built a 12-point lead by the end of the quarter. Yang, who had six points, got one of his on a smooth transition basket after taking the ball coast to coast off a North Stanly turnover.

“Alex has been making huge plays for us all year,” Causby said. “Sometimes he just gets overshadowed because he does all of the little things.”

Fazia, a 6-foot-5 junior, led the Hornets with 17 points. He also showed to be an emotional leader Friday by rallying the Salisbury student section, high-fiving a few fans during a timeout in the second half, and telling the kids in the stands, “I got this.”

The Hornets got double-digit efforts from D.J. Alexander with 15 points, Tre Oats with 13 points, and Troutman with 10 points.