Boots on the Ground: members of Jerusalem Baptist build house in Haiti 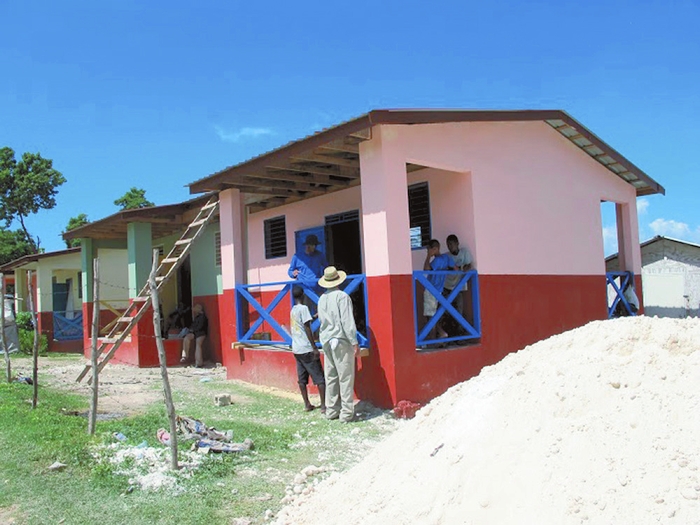 The completed duplexes are 13-feet by 19-feet on each side.

The Rev. Dr. David Bracken’s doctoral thesis focused on mission work. And maybe, he thought, it was time for his own congregation “to put some boots on the ground.”

About 18 months ago, he issued the challenge to members of Jerusalem Baptist Church. In September, four men and two women joined Bracken in Haiti to build a house.

The president of a mission group came and spoke to the congregation. He was someone whom O’Kelly already knew.

“Knowing someone who had been there, I was ready to go,” O’Kelly says.

So were the other men. But they first had to help raise $8,000 to build the house. Half the money came from Bluestone Missionary Baptist Church in Pelham. Its pastor and Bracken were classmates at Drew University.

“It was quite a challenge for us,” says Bracken, who pastors a 225-member congregation.

“It was something I’ve always wanted to do,” says Jones, who refers to the Great Commission in Matthew. “It tells us to go. I had no alternative, and I was able to go.”

Hailey says he “dibbles and dabbles” in home repair. Bracken says the team was impressed with his expertise.

“My professional goal was to be a brick mason, but the military changed that plan,” he says. “It came into my spirit that I was going. When Pastor said he was going, I said, there’s two of us, then. It snowballed from there.”

Each member of the mission team was responsible for raising an additional $2,000 per person for travel expenses.  They wrote letters to family members, and paid out of their own pockets. The church family paid about one-third of the team’s expenses, Bracken says.

When Black heard about the opportunity, he says, “I knew I was going to go right then and there, if the Lord was willing. I knew the Lord would make the way. If you take the first step, God will lead you the rest of the way.”

To prepare for the trip, the team obtained passports, and took rounds of shots for hepatitis, typhoid, malaria and tetanus.

They received training from Joe Wilson about the Haitian culture, do’s and don’t’s, information about their work assignment and what to pack.

“That was very helpful,” O’Kelly says. “What he told us was the way we experienced it.”

When the group got to the airport in Greensboro, they met other mission groups from other denominations, all headed for Haiti.

“We were just one footprint in the sand,” Hailey says, “but that was the start of our adventure. We met more groups going with the same purpose. There were so many people converging to go to Port au Prince to do God’s work in different locations. We had the joy of knowing God was at work. God met us there. We saw the good, the bad and the ugly. And we saw the grace.”

“We weren’t going in fear,” Black adds. “We were doing what God wanted us to do.”

Although the earthquake in Haiti happened in 2010, you could still see destruction, O’Kelly says. “The majority of it was still in devastation.”

According to figures the men received, Jones says, the earthquake displaced some 1 million people, and left more than 300,000 dead and the same number injured.

“We went into a village of 300, and I was the second-oldest person,” Hailey says. “I’m 65. A lot of elderly were killed. We have a lot of elderly people in our church. It felt weird for a minute.”

The group stayed at Inspiration Guest House, only 10 miles from the worksite, but a 45-minute trip by van because of all the traffic. With nobody obeying traffic laws, Jones says, it made him “quite nervous. But we had an excellent chauffeur. We said a word of prayer before we left every day.”

The group saw extreme poverty. Some Haitians make the equivalent of $2 per day, and three-quarters of the population makes even less.

“They act as if they don’t know they’re poor,” Jones says.

“If you have a house, you’re considered rich,” Black says. “Jesus says the poor will always be with us, and if you go to Haiti, you’ll see why. That’s just the way it is.”

The Jerusalem group helped build a house in Lambi Sustainable Village, a complex of 58 houses. The duplex they worked on had a 13-foot by 19-foot room on each side, along with a front porch and back porch, both 8-feet by 18-feet. The homes are made of concrete blocked and topped with tin roofs. They’re wired for electricity, but people have to get to the point where they can afford it.

Hailey jokes that there’s running water — you run to the pump to get it.

But Hailey didn’t have electricity in his house until he was 5. “I’ve been there before,” he remembers.

Electricity is often turned off at night.

“We asked them, when it gets dark, what do you do?” Bracken says. They go to sleep.

The children did their homework after school each day. And children who did not go to school — education is not free in Haiti — got help from those who did.

Jones says the group ate what Haitians eat — a diet of mainly fruits and vegetables including mangoes, bananas, sweet potatoes, plantains, along with beans and rice and chicken. Fishing is a valuable industry.

The group worked on a variety of construction projects: making rebar and mortar, working with concrete blocks and sheet metal, painting, and building hand rails. The new homes are built to withstand earthquakes.

Hailey found a wheelbarrow — in any kind of shape — to be a hot commodity. “As long as it worked, they had something in it.”

The group worked each day from 8:30 a.m. to 4 p.m. Some of the men are retired and some still work, and you think they’d all be exhausted after a long day in a subtropical environment.

Black says the group worked alongside Haitians, and had the chance to share their faith in a land where voodoo is common.

“We planted a seed about God,” he says.

All of the men say the experience changed them.

“It made me realize that it doesn’t take a whole lot to be happy and content, and to accept what God gives you,” Hailey says. “The Lord supplies your needs.”

It made Jones realize how material American culture is. “If you compare this life with the life in Haiti, we do have more material things. But they seem to do more with less. Most Haitians eat one big meal a day — beans and rice. Most of us have to decide what to eat. I realize how blessed I am.”

Hailey met a little girl who’d seen family members murdered. She had been afraid of anyone who tried to help her, but she came up and took his hand. “Something went through me. I know I’ve got to do something to help her. Those kids were my grandchildren when I got there. You can’t say it wasn’t worth the trip. You can’t ever put a value on that.”

Black says he now understands poverty better in this country.

“I realized how blessed we are as Americans, with all the amenities we have here,” O’Kelly says. “Now I know personally that there are people in need. I feel I need to go back.”

The men say they want to sponsor at least one student for college. Black says he hopes others in the congregation will be inspired to help.

Bracken, too, wants to return to Haiti. Chances are he’ll have other members of the church putting their boots on the ground, too.