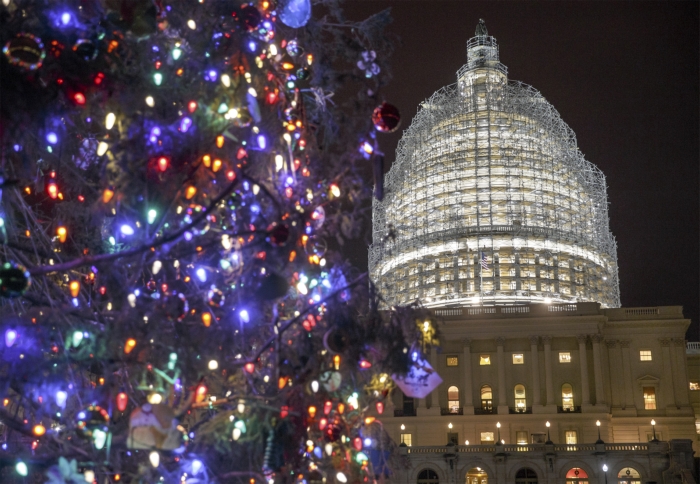 The Capitol Dome and the Capitol Christmas Tree are illuminated in December 2014 evening as Congress works to pass a $1.1 trillion U.S. government-wide spending bill and avoid a government shutdown, in Washington, Thursday, Dec. 11, 2014. The Obama White House and House Republicans joined forces Thursday to pass the funding bill over clamorous protests from Democrats objecting that it would roll back bank regulations imposed in the wake of the economic near-meltdown of 2008. (AP Photo/J. Scott Applewhite)

The $1.1 trillion measure passed despite Democratic complaints that it would ease bank regulations imposed after the economy’s near-collapse in 2008.

3. WHERE CALIFORNIA STORM IS HEADED NEXT

4. POLL: REPUBLICANS BACK LIMITS ON CARBON

An AP survey finds half of Republicans back restrictions on carbon pollution, even as GOP lawmakers vow to undo environmental regulations they claim harm the economy.

With elections looming, challengers say that after nearly nine years in office, it is time for a new face at the top instead of Benjamin Netanyahu.

7. HOW SOME ARE AVOIDING BIG BOX STORES

U.S. consumers are going over the Internet and through the woods to find Christmas trees this year.

Global warming talks wrap up with countries arguing over what kind of climate action plans they should present for a key summit in Paris.

One of the bigger movies of the year remains tethered to the launch pad after getting only one Golden Globes nomination — for score.

10. CARDINALS LOSE ANOTHER QB TO INJURY

Backup quarterback Drew Stanton injured his knee, but Arizona rode its tough defense to a 12-6 win over the St. Louis Rams.

Planning board suggests denial of business zoning in China…