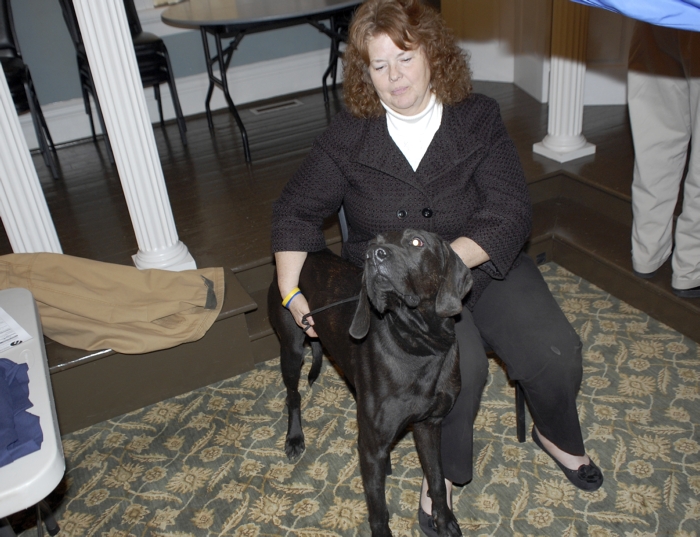 SALISBURY — At the risk of sounding like an announcer at an American Kennel Club dog show, let’s introduce the Plott Hound.

Plotts are big-game hunters and strongly independent hounds. They are known for great courage and stamina. They are the only United Kennel Club-registered coonhounds not descended from foxhounds, and some owners think it’s wrong to use them as coon dogs.

The Plott Hounds made their reputation by hunting bear and wild boar. They have a clear voice and a powerful, streamlined body. To their owners and handlers, they are quite loyal and eager to please.

Plott Hounds have been the state dog of North Carolina since 1989, and probably no other dog deserves that distinction as much as the Plotts, given their history.

“You can teach them anything — they’re super-, super-smart dogs,” said Bob Plott, who, yes, is a direct descendant of the men for whom the hounds are named. For now, Plott is the last person in his family still raising the dogs.

A speaker for the N.C. Humanities Council’s Roads Scholar program, Plott gave a presentation on these dogs to the Rowan History Club Tuesday night at the Rowan Museum. As part of Plott’s appearance, Bev Millage, a champion breeder in Rowan County and owner of 36 Plott Hounds, brought 16-month-old Butter Bean with her for the audience to see.

Butter Bean is a black Plott Hound with the distinguishing brindle coat, and he’s already winning at shows. Millage said he has two half-brothers who were world champions.

Male Plott Hounds like Butter Bean grow to be about 27 inches high and 75 to 80 pounds in weight.

It was Plott’s great-great-great grandfather — Johannes Georg Plott — who landed in Colonial America in September 1750 with five Hanoverian Schweisshunds  bred by Johannes’ father, a gamekeeper in Germany. Through culling the dogs they bred in Germany, the Plotts had developed a tremendous hunting dog for wild boar, Bob Plott said.

Johannes Plott arrived in Philadelphia as a 16-year-old with three brindles and two buckskin hounds. How and why he and his dogs made it south is not exactly known, but they ended up in New Bern, where there was a German settlement. It was there Plott started training his dogs to hunt bear, not boar.

The westward migration of Plotts started soon, with Johannes making his way toward Concord, then moving near Maiden in today’s Catawba County.

The pack of hounds eventually passed down to Henry Plott, Bob’s great-great uncle, who moved much farther west to Haywood County, a frontier at the time. It was around 1800, when his crop failed and Henry had to depend on the dogs’ hunting skills to make it through the winter, that the Plott Hounds started gaining a reputation for saving lives.

Bob Plott says western North Carolina and the Smoky Mountains in general became a perfect place for Plott Hounds — by then strongly identified with the family’s name — to establish their reputation among hunters.

From 1800 to about World War II, mountain lifestyles, especially those connected to hunting and fishing, were in “a time warp” Bob Plott said, and limited crosses with the Plott Hounds also occurred over this period.

Early in the 1800s, the National Plott Hound Association says, a hunter living in Georgia heard about the North Carolina dogs. He traveled to western North Carolina, borrowed one of Henry Plott’s hounds to breed to his own “leopard-spotted bear dogs” and returned the Plott about a year later.

“This single cross is the only known instance of new blood being introduced into the Plott Hound since they first came to the country,” the NPHA says in a history.

Other crosses eventually took place a century later. G.P. Ferguson, a neighbor to the Plotts, became a major influence on the breed, mixing in bloodlines of Blevins and Cable hounds.

As part of his program, Bob Plott told several stories, illustrating the Plott Hounds’ fierceness, loyalty and intelligence. They gained a reputation across the country and spread westward as people in the early 1900s were coming to North Carolina as part of large hunting parties with paid guides and dogs.

As some Plott family members moved west themselves, dogs went with them, and loggers looking for work also helped the breed to establish itself everywhere.

By 1946, the Plott Hound was registered with the United Kennel Club.

The National Plott Hound Association formed in the 1950s. In the 1960s, the dog was featured on a hunting episode of “American Sportsman,” a popular television show on the outdoors.

Plott also told a story of how the Japanese emperor once asked two men from Washington State to bring their Plott Hounds to help in hunting and killing bears that were terrorizing some Japanese villages. The dogs’ success in this mission made them revered for a time in Japan, Plott said.

In 2009, the state erected in Haywood County a historic marker in honor of the Plott Hound.

With Bob Plott’s help, The History Channel aired a show in 2011 about Plott Hounds and primitive wilderness skills.

In modern day, Plott Hounds have adapted in many ways. They are used, for example, as search-and-rescue animals and service dogs.

The back of T-shirts Bob Plott sells related to Plott Hounds describe them as “Hunter. Herder. Protector. Friend.”

Author of “Strike and Stay — the Story of the Plott Hound,” Plott said he routinely keeps four Plott Hounds at a place in Florida and four at his home in North Carolina. As a breeder, he charges top dollar for his Plott pups — $900 each. It’s a way to make sure they go to a good home, he added.

In their wildest dreams, Plott said, his ancestors could not have imagined the success the breed has seen in the state and country overall.

“I’m certainly proud to carry on that legacy today,” he said.

Pastor wants to give his gospel-singing friend a new…