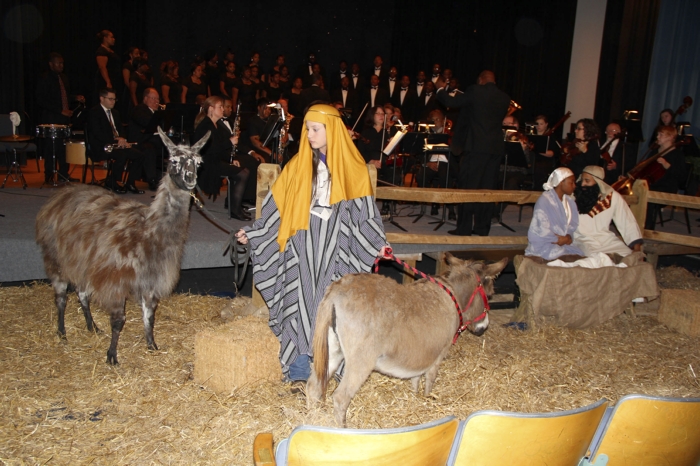 SUBMITTED PHOTO Livingstone students perform at "Miracle on Monroe Street -- Back by Popular Demand!" in Varick Auditorium; Salisbury Symphony members in the background.

When Zamya Robinson peeked inside her gift bag Saturday evening at the Events & Hospitality Center at Livingstone College, she couldn’t contain her excitement. “I got a Doc McStuffins doll!” the 5-year-old exclaimed with a huge smile on her face.

Zamya was among dozens of children who attended the second annual Community Christmas Dinner at Livingstone, which began at 5 p.m. and was followed by “Miracle on Monroe Street – Back by Popular Demand!” in Varick Auditorium.

The concert was conducted by Livingstone Director of Bands Sidney C. Sessoms, Jr., and featured music from “The Ballad of the Brown King,” by Margaret Bonds. Dr. DaVaughn L. Miller directed the Concert Choir, Michael D. Connor directed theatrical performances and Dr. Joanne K. Harrison served as accompanist. And about two dozen members of The Salisbury Symphony performed on stage with Livingstone.

Suffice it to say, both events were a huge success!

“It was really nice,” said Nadine Coleman of Salisbury. “I enjoyed everything. The dinner, the concert. Everything was good.”

“The place where we had dinner was decorated so beautifully, and at the concert when the kids saw the live animals they just started sitting up in their seats,” Coleman said. “They were really excited by the animals.”

Of course, nothing excited the children more than Santa Claus, who made his grand entrance at the Events & Hospitality Center around 6:15 p.m. after bellies were full and the lights were dimmed.

Fulton, who also portrayed a shepherd in “Miracle on Monroe Street – Back by Popular Demand!” told the children he couldn’t stay long because he had to get started on delivering toys throughout the land.

“I’m really busy, but I wasn’t too busy to come by to see you,” he said. “And I want to tell you to make sure you’re nice to your parents.”

Before Santa left, he asked boys ages 12-14 to come up so he could give them presents. Four of them received official NBA basketballs, and two of them were given Walmart gift cards.

The Community Christmas Dinner and Concert were the brainchild of Livingstone College President Dr. Jimmy R. Jenkins, Sr., who donned an apron and helped serve the institution’s guests on Saturday. Members of his Senior Cabinet, faculty, staff and students assisted him in serving the food. His wife, First Lady Dr. Faleese Moore Jenkins, and his sister and brother-in-law, Willie and Joe Valines, also attended.

Jenkins got the dinner started by welcoming guests, thanking them for attending and saying the college strives to be a contributing member of the Salisbury community. After his remarks, senior Dairon McGraw performed. His selection was followed by Battle’s videotaped message, in which he joked about not spilling any food or iced tea last year when he and his wife Iris Miller Battle helped serve.

The Battles had a prior commitment with the AME Zion Church and couldn’t attend Saturday’s festivities. In his greeting, Battle also reminded the families that the birth of Jesus Christ is why we celebrate Christmas, and he commended Jenkins and the Livingstone College family for again demonstrating Luke 12:48, “To whom much is given much is required.”

Jordan Nunley, 9, a fourth-grader at Isenberg Elementary School, was among the children in attendance.

“I’m thankful for the dinner and think the decorations are pretty,” Jordan said. “And I think Dr. Jenkins is a good man.”

Jordan attended with her mother Adrena Johnson, her brother Julian Johnson, her aunt Kari Johnson and her cousin Dallas Johnson.

Before dinner ended and guests headed to Varick for the Christmas Concert, Jenkins awarded scholarships to obtain a certificate in culinary arts to Ashley Black and April Frye.

In his application essay, Black said obtaining a culinary arts certificate “would give me an opportunity to build my career that I otherwise would not have. It would also allow me to showcase my talents as well as learn more about the culinary field.”

Black, who was reared in a single-parent household with several brothers and sisters, told dinner guests that his mother is his inspiration and he wants to obtain a culinary arts certificate to make her proud and to provide for his children.

The other scholarship recipient, April Frye, cried as she read her essay.

“Obtaining this training will be the difference between having a career or simply a job to go to every day,” Frye said. “Alleviating the stress that amasses from worrying about funding, this award will allow me to stay driven and fully focused on obtaining a higher education. It will mean I am one step closer to the future I’ve envisioned for myself and my children.”

“I’m confident Mr. Black and Ms. Frye will do well in our culinary arts program,” Jenkins said. “Last year’s scholarship recipients are working and getting high remarks from their employers. Mrs. Ray and her staff do a great job preparing our students for what to expect after they graduate, and I’m grateful Livingstone was able to step up to the plate once again and offer scholarships to two deserving people in our community. I have no doubt coming to Livingstone and learning more about the culinary field will greatly enhance their lives.”