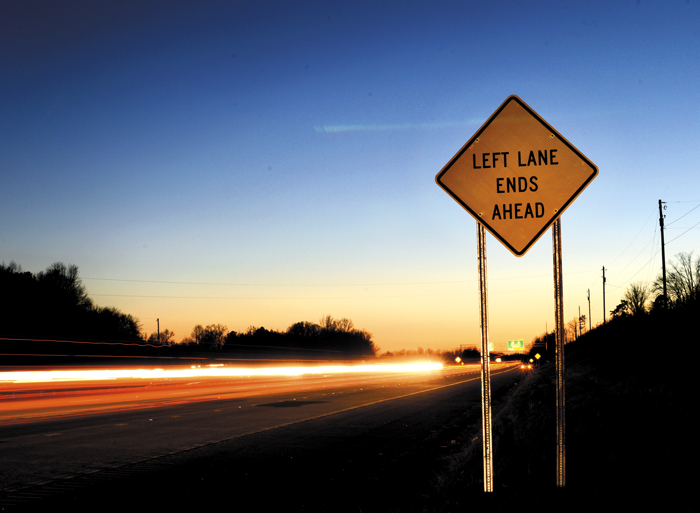 Josh Bergeron / Salisbury Post - Cars zoom past a sign near the I-85 China Grove exit Wednesday. The sign sits near the spot where I-85 shrinks from four to two lanes.

In three to four years, motorists could zoom down I-85 in south Rowan on an eight-lane road.

With an I-85 expansion officially placed on the state’s 10-year transportation improvement plan, Department of Transportation Division 9 Engineer Pat Ivey said the project could begin at the start of fiscal year 2016 — July. Ivey said three years is the average total completion time of a project like the expansion.

Currently the state’s transportation improvement plan is in draft form. It will go through a public comment period in March and April before final approval in June 2015.

“We’ll know the timeline for sure when it’s finally approved,” Ivey said. “At that time we’ll have all the schedules worked out.”

The I-85 expansion is classified as a design-build project, which means that construction could be happening at the same time as another part of the project. He said any right of way acquisition would likely be finished in the first year of the project, with all affected property owners receiving a letter. The letter won’t be mailed until closer to the time that a land purchase would occur.

Rowan County isn’t the only one in the Piedmont involved in the expansion project. Construction is ongoing in Cabarrus County on another leg of I-85 that’s two lanes. The Cabarrus portion starts at exit 55 or North Carolina Highway 73. It ends at Lane Street or I-85’s Exit 63.

The Rowan leg of the expansion picks up at Lane Street and ends at the U.S. 29/U.S. 601 Connector. It’s currently in the planning and design phase, according to the state’s transportation improvement plan.

Ivey said the construction that’s currently ongoing in Cabarrus County wouldn’t have an affect on when the Rowan portion starts.

“While they are related, one will not influence the other in terms of construction,” he said.

Once construction work starts, he contractors would likely keep both lanes of traffic in the two-lane portion open. At night, Ivey said it’s more likely one lane of traffic could be closed.

Financially, none of the funding will come from local government entities, instead coming from GARVEE bonds. Department of Transportation Chief Financial Officer David Tyeryar said a number of projects in the state’s plan are funded through the bonds, which are are a borrowed amount of future federal revenue, Tyeryar said.

“We receive a certain allocation of federal revenue each year and can bond up to a certain percentage,” he said. “Essentially it’s just like issuing any debt authorized by the legislature. It’s borrow money against future federal revenue streams.”

The total cost of the expansion is $140 million. The actual work on the project may only take a few years, but the transportation improvement plans shows the payback of GARVEE Bonds lasting until the 2027 fiscal year.

The state’s transportation improvement plan was unveiled last week and included a total of nearly 1,100 projects across the state and billions in spending. Rowan county has dozens of projects that are strictly within its borders, many of which are bridges.