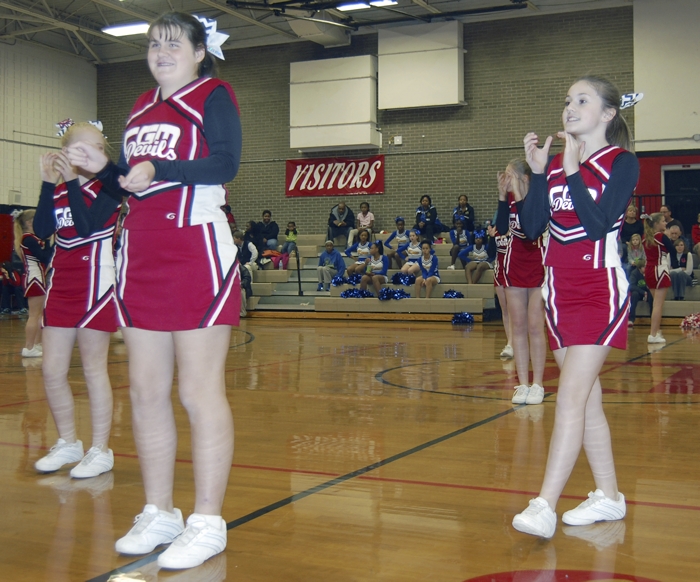 None of the 13 girls were close friends before they started cheering together, but now, the group is inseparable.

“I think it really brought us together. We’re like sisters now,” said Bailee Elliott.

Last year, Emily Hall served as the squad’s special helper, but this year, she joined the team.

When Hall, who has Down syndrome, started helping with the team, she was shy and not very communicative, according to cheerleading coach Davina Stewart.

But the girls embraced her, and Hall began teaching herself some of the cheers, including her favorite one, called, “Special.” The cheerleaders even asked her to call the cheer for them at games

“I’ve seen a huge improvement, mostly in behavior toward other individuals,” she said. “Middle school is a difficult time. I know that it has opened their eyes.”

“These girls have embraced not just Emily, but all our students with special needs,” said Athletic Director Lisa Faggart. “I could not ask for a better group of girls.”

Stewart said the girls also try harder because they see Hall working so hard to be a part of the team.

Hall’s place on the team has had an “impact on the other students – not just the cheerleaders – because they all route for Emily,” Faggart said.

The team practices on Tuesdays and Wednesdays after school and cheers at games on Mondays and Thursdays. The girls can participate in an optional tumbling class on Fridays.

The group displays a unique spirit of unity, respect and inclusion.

Kenzie Yow said those values are what opens the door for the girls to be such good friends.

They joined the cheerleading squad for a host of reasons – for fun, to promote school spirit or to make new friends – but they actually joined a family.

“We always listen to each other and take in everybody’s ideas,” Sarah Maynor said.

“Everybody has a chance to talk,” Savannah Oxendine added.

“All the decisions we’ve made have made us better,” said Taylor Porozynski.

Maynor added that Hall is the group’s peacemaker.

Hall said her favorite part of being on the cheerleading squad is learning to do the cheers.

“We’re very supportive of each other,” Elliot said, adding that the girls always strive to include Hall in everything they do.

Sometimes that means thinking creatively to find ways Hall can participate. The girls have learned to add a chair so she doesn’t have to kneel, or rearrange the way things are set up so Hall can take part in the cheers.

“She’s really brought us together,” Maynor said. “She always helps us think about each other.”

Pastor wants to give his gospel-singing friend a new…