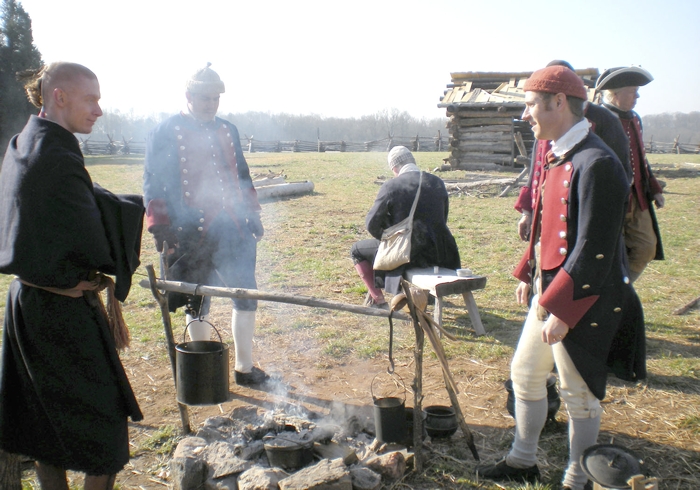 Re-enactors at Fort Dobbs will show what winter was like for colonial-era soldiers who built the fort on Dec. 13.

STATESVILLE — In the winter of 1755, 50 soldiers worked to complete a fort on the freezing frontier of North Carolina. The fort was needed to protect settlers and mark the edge of the British Empire. Construction meant the soldiers endured the elements as best they could. That harsh reality will be shown Dec. 13, as Fort Dobbs State Historic Site offers a glimpse into the daily lives of the soldiers.

Named for royal governor Arthur Dobbs and commanded by Hugh Waddell, the fort was the base of operations for Waddell’s troops during the French and Indian War, which was the climax of centuries of tension between England and France. The western frontier was considered dangerous, and on occasion colonists would stay close to the fort’s fortifications to remain protected from attacks by French-allied Cherokee Indians.

Educational programs at Fort Dobbs give life to North Carolina’s past experiences and traditions and demonstrate the value of living history to students and adults.

For more information call (704) 873-5882 or visit www.fortdobbs.org. Fort Dobbs is the only state historic site dedicated to the period of the French and Indian War (1754-1763), also known as the Seven Years War, and the state’s only link to a war for empire that crossed five continents and lasted nearly 10 years. It is part of the Division of State Historic Sites within the N.C. Department of Cultural Resources.