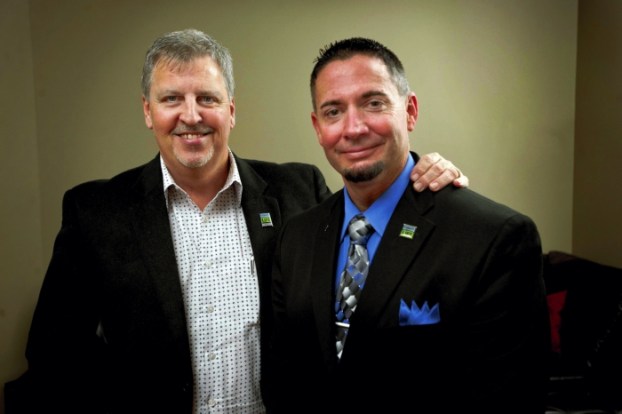 JON C. LAKEY / SALISBURY POST Don Herbert (left) , a 47-year-old gospel singer, who has been suffering from a failing kidney is close to kidney failure. The chances of finding a donor were not very good because of the tremendous amount of would-be receipants on the waiting list. Herbert ran into local pastor Tim Jones who struck up a conversation and eventually Jones was lead by the spirit to donate one of his kidneys to Herbert. Tuesday, December 9, 2014, in Salisbury, N.C.

Pastor wants to give his gospel-singing friend a new kidney

SALISBURY — Meet Don Herbert, once a full-time professional wrestler who went by the name of John Savage. Now he’s a tenor in the gospel-singing group The Parables of Christ. He needs a kidney.

Jones has a kidney he wants to give to Herbert.

“It’s mind-boggling, to know that someone is willing to give a part of themselves,” Herbert says. “I don’t even know how to respond to that. If it were me, in the same situation, I hope I would do the same thing.”

A chance meeting brought these two strangers together Oct. 25 when Jones’ new church was having a craft and bake sale. Don and his wife, Belinda, drove by never intending to stop. When Belinda persuaded Don to pull in, he announced he would just stay in the car while she looked around.

But the church’s front door was open, and some recorded Southern gospel music — playing loud — drew Herbert inside the building.

“This wasn’t an old-lady yard sale,” Jones says sheepishly about how loud the music was. “Right before Don showed up, I was ready to leave. I would have missed him, but I believe in the will of God, and I believe God puts people in your path for a reason.”

Over their shared love of gospel music, the men struck up a conversation, with Jones learning that Herbert was part of The Parables of Christ. Jones already had printed flyers and fully booked gospel singers for a revival he had planned Nov. 20, but he invited Herbert to bring his gospel trio anyway.

The topic of a kidney never came up, and the men simply parted as new acquaintances.

Jones had no idea the health issues Herbert had dealt with prior to their meeting.

Herbert, 56, had undergone a liver transplant March 17, 2013. Although he responded well from that surgery and his body accepted the new organ, problems he was having with his kidneys continued to worsen.

After a visit to Duke University Medical Center in early November, Herbert learned he had stage 4 kidney disease. Both of his kidneys were failing, but there were more issues.

A stress test revealed Herbert needed a heart catheterization, but he was told the dye used in that procedure would destroy his already-diseased kidneys, forcing him onto permanent dialysis. Because he would need the heart catheterization first, the medical center removed him from the waiting list for a new kidney because the wait typically is three to five years.

The Herberts returned from Durham a bit shaken. Belinda posted Don’s status on their Facebook page, and as part of her long message, she made a personal plea for anyone to consider giving Don the gift of life through another organ donation.

“I want to grow old with Don by my side,” she wrote.

Jones says it was only my happenstance — though he really thinks God was at work again — that he read Belinda’s post that day. He was browsing Facebook in the afternoon, an unusual time for him, because he had just posted a message to his church’s page.

“It just struck a chord and touched my heart,” the 44-year-old Jones says of Belinda’s message. He began praying about Herbert’s finding a transplant, then found himself discussing with his wife, Sherry, the possibility of his donating a kidney to Herbert.

“What if it was me?” he asked her, “or what if it was you? How many people would be lining up, waiting to give us a kidney?”

It wasn’t long before Tim and Sherry had invited Don and Belinda Herbert to their Salisbury home in Settlers Grove, off Old Concord Road. The Joneses then heard Don’s whole medical history and how much he has been through. Soon, Jones told Herbert he wanted to offer one of his kidneys as a gift.

As a pastor and working in an operating room, Jones says, he has seen people at their best and worst. Why not show people there are those willing to give of themselves? And if his kidney gives Don and Belinda 20 more years together,  Jones says, won’t it be worth it?

“It gives them hope — that’s something they didn’t have before,” Jones says.

Together, Herbert and Jones announced Jones’ proposed gift of a kidney during the Nov. 20 revival. A crying Belinda Herbert gave Jones a big hug. Many others were in tears, too. As you can imagine, the families have become close in recent weeks.

“I feel like I’ve known him my whole life,” Jones adds.

So far, the pastor looks to be a good match for the gospel singer. Jones has  gone through some telephone interviews with Duke Medical Center and some blood screenings. Because of his O positive blood, Jones is a universal donor – a good thing because Herbert has O negative blood.

For various reasons, both men will be at Duke University Medical Center Jan. 12-13 for tests and to make sure their sets of antigens match up to allow Jones to be a donor for Herbert. Doctors also will give Herbert a better idea of how long his kidneys will last before dialysis is needed.

If Jones is not a match, he still plans to donate a kidney to someone else, which allows Don to be given priority when another kidney is available.

“Either way, he’ll get a kidney out of it,” Jones says. “We’re hoping we can get this done around March, but obviously, Don’s health will take precedence.”

Herbert knows about waiting. He was on a waiting list for 12 years before receiving his new liver in 2013. At that time, his kidney troubles had bumped him to the top of the list for the new liver.

“My faith has always been tested,” said Herbert, whose father was a preacher. “I’ve tried to stay strong in my faith, and I believe that when it gets the darkest, it gets the lightest.”

As John Savage, Herbert toiled full- and part-time on the professional wrestling circuit from 1978 to 1992. He married Belinda 29 years ago, was saved and began gospel singing in earnest in 1986. Today, The Parables of Christ, a group he has been with about seven years, performs 150 to 160 dates annually over six states.

The trio includes Herbert, who lives in Kannapoilis, Carroll Melvin of Conover and Dwana Moose of Concord. Herbert also is a former sales and purchasing manager for  local companies, but because of his health issues, he hasn’t worked since 2002.

Medicare will pay for both Tim’s and Don’s surgery, but the men hope to hold some fundraisers to defray other expenses, such as travel, lodging, food and lost wages during the recovery process.

The Parables of Christ and another gospel group will be singing at a revival planned from 7 to 9:30 p.m. Jan. 16 at Southeast Middle School. Tim also will preach at that fundraising event.

Donations also are being accepted at F&M Bank locations by walking in, or mailing contributions to the F&M branch at 2975 Dale Earnhardt Blvd., Kannapolis, NC 28083. Checks should be made out to the Herbert/Jones Transplant Fund, care of Mercy Independent Baptist Church.

There also is a fund through Facebook — “Herbert/Jones Kidney Transplant Fund” — where donations can be made through a debit or credit card.

For his part, Jones says he is not nervous. “Things are risky for me, I understand that,” Jones says, “but they are more risky for Don. My wife kids me and says, ‘You act like you’re giving him a piece of gum.'”

SALISBURY — Last week during a day off, I decided to take a few moments and sift through items my... read more