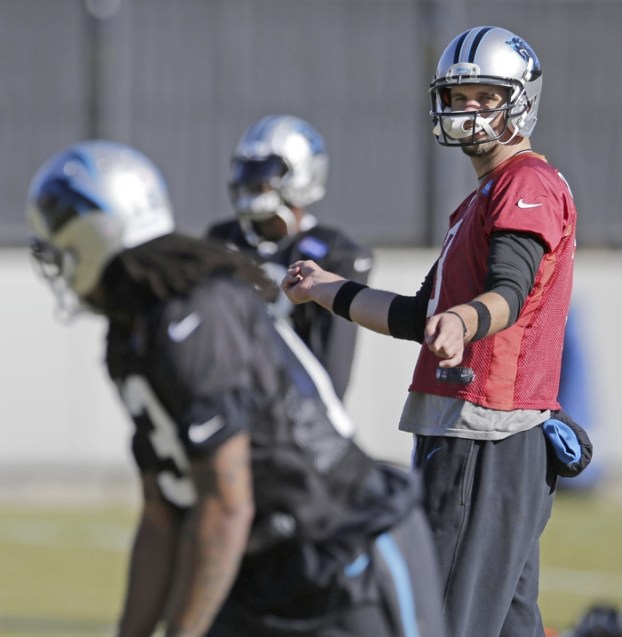 The Associated Press Carolina quarterback Derek Anderson, right, directs Kelvin Benjamin, left, during practice in Charlotte on Wednesday. Anderson will replace starting quarterback Cam Newton on Sunday if Newton is unable to play after being injured in a car crash on Tuesday.

CHARLOTTE, N.C. (AP) — Cam Newton will not play Sunday against the Tampa Bay Buccaneers while recovering from an automobile crash that left him with two fractures in his lower back.

Panthers coach Ron Rivera confirmed Wednesday that Derek Anderson will start and Joe Webb will be his backup.

Newton was discharged from the hospital earlier Wednesday, a day after he was injured when his truck crashed and overturned in a two-car accident. Charlotte-Mecklenburg police issued no citations for the accident.

Newton was not at the team’s facility on Wednesday, though Rivera said he is expected to be in on Thursday and his playing status will be reevaluated next week.

The coach said he met with Newton on Tuesday at the hospital and “in true Cam fashion, he was disappointed for his teammates. He feels like he is letting us all down.”

Rivera said Newton flashed his smile and “when he did that you knew everything was going to be OK.”

The coach said he has confidence in Anderson, now in his 10th season.

“He’s had some success in this league,” Rivera said.

Anderson started against Tampa Bay in the season opener and threw two touchdown passes, leading the Panthers to a 20-14 victory.

Panthers spokesman Charlie Dayton said Wednesday that Newton is stiff and sore, but otherwise “his spirits were high.”

Newton left the hospital with his family and will stay with them while recuperating. His father Cecil and mother Jackie, who live in Atlanta, arrived in Charlotte Tuesday after the accident.

A police report states that Newton was driving when a car driven by Nestor Pellot Jr., 46, of Fort Mill, South Carolina, pulled out in front of the fourth-year quarterback, causing his vehicle to flip. The report said Pellot didn’t see Newton’s truck at first and when he did, he tried to avoid a collision.

The report does not place blame on either driver.

However, the report lists two witnesses who said Pellot pulled out in front of Newton, causing $9,000 damage to the quarterback’s 1998 Dodge truck. Pellot’s 2013 Buick suffered $4,000 damage.

Like Newton, Pellot was also taken to the hospital but his injuries are unknown.

Panthers general manager Dave Gettleman was at the league owner’s meeting in Irving, Texas on Tuesday when he received a call from his office about the crash.

“I’m just thankful he was wearing a seatbelt and everyone involved is all right,” Gettleman said Wednesday morning before boarding a plane back to Charlotte.

Gettleman said he was horrified by the photos from the accident scene and that it wasn’t until sometime later he breathed a sigh of relief.

“You spend so much time with these guys and they become part of the family,” Gettleman said.

The horrific-looking accident was the latest unfortunate turn in what has been a frustrating season for Newton.

He was coming off his best game of the season and the crash has left his return to the field in question.

Neymar was sidelined about four weeks. Romo, who was injured against Washington, sat out one game before returning to action the following week.

However, Newton is asked to run more than Romo and takes more hits than any quarterback in the league.

The Panthers have three games left in the regular season.

They enter a crucial stretch one-half game behind the Saints and Falcons, both 5-8, in the NFC South. If the Panthers win their final three games and the Saints lose one game, Carolina will repeat as NFC South champions.

Ironically, Newton missed Carolina’s first game against Tampa Bay in Week 1 while recovering from ankle surgery and fractured ribs in the preseason.

The two-time Pro Bowl quarterback is having a roller-coaster season, but put it all together Sunday against New Orleans. The Panthers (4-8-1) catapulted themselves back in the NFC South playoff race with a 41-10 rout of the Saints. Newton threw three touchdown passes and snapped a string of eight straight games with an interception.

An Atlanta native, Newton led the Auburn Tigers to a national championship in 2010.

Newton is under contract through 2015 after the Panthers picked up a one-year option on his rookie deal. Newton will make approximately $15 million next season.