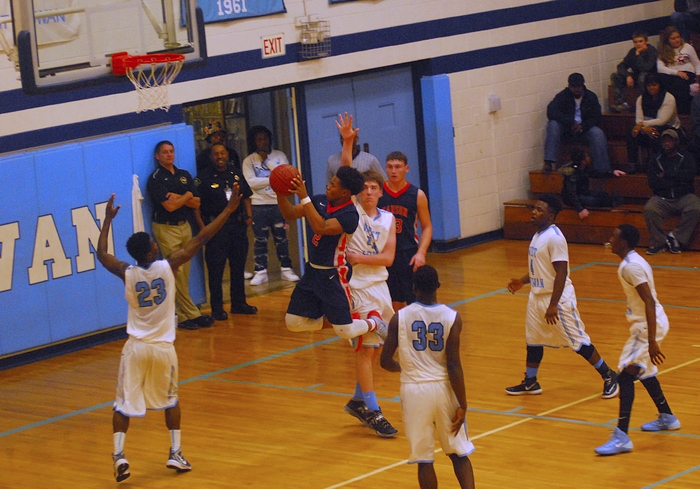 Adam Houston/The Salisbury Post Carson's Armoni Hogue (2) knifed his way through the defense during the second half of Tuesday's South Piedmont Conference game in Mount UIla.

The Cougars played the rugged, bruising, brawny kind of game they need to play in the gritty South Piedmont Conference this winter and escaped with a 68-60 victory.

“Every game this year has been a tough game,” coach Brian Perry said. “The ones we’ve lost, the ones we’ve won, have all been a couple-of-possession games. It’s nothing we’re not used to.”

Carson (4-2, 1-2) placed four scorers in double figures and pulled away in the fourth quarter, when Marquez McCain and Jamarius Hairston each collected eight points.

“We knew it was going to be a fight,” Jonathan Rucker said. “We knew this is a tough place to win. It was just a matter of trusting each other and making the right play.”

West Rowan (2-4, 2-1) trailed 30-25 before scoring seven unanswered points to inch ahead midway through the third quarter. Caleb Mauldin’s stickback, a three-point play by Kortez Weeks and a nifty layup by Greg Joseph fueled the rally. Carson answered with its own charge before the Falcons, who went 14-of-31 from the free throw line, squandered a chance to reclaim the lead late in the period.

“Carson played well,” said Weeks, the sophomore who netted 15 points for West Rowan. “We’ve just got to fix some little mistakes. We’ve got to rebound more. We’ve got to make better decisions. This was tough, but we’ll see them again later in the season.”

A foul-plagued fourth quarter saw Carson take a 55-46 lead when McCain (17 points) muscled inside for a layup with 2:30 remaining. The Cougars went 16-for-22 from the foul line in the last six minutes.

“The game was moving fast but we stayed calm and kept our composure,” said guard Jacob Raper. “We knew they had to foul. We knew we could hit our free throws. And we played with confidence.”

“Those guys are seniors,” he said. “When the game got a little wild, they calmed us down. In the fourth quarter when we took a little lead, there were a couple of times when guys just took off, a hundred miles-an-hour to the rim, threw something up and hoped to get a foul.

“That’s when those seniors got the team together and said, ‘Relax. Take your time. Move the ball around. Wait for a good shot.’ It worked. We got our spacing right and they had to foul.”

West Rowan coach Mike Gurley focused on seeing the good side of bad.

“We missed 17 free throws,” he said. “But we did a really good job of getting the ball where we wanted it — inside. We don’t go inside to get people in foul trouble. We go inside because it sets up everything else. Then we missed our free throws. It’s just something we’ve got to get better at.”

Carson did more than gain a valuable conference win on the road. It got its season pointed in the right direction.

“This gets us started,” said McCain. “We had to play hard and sell out. Now we’ve got to keep winning.”