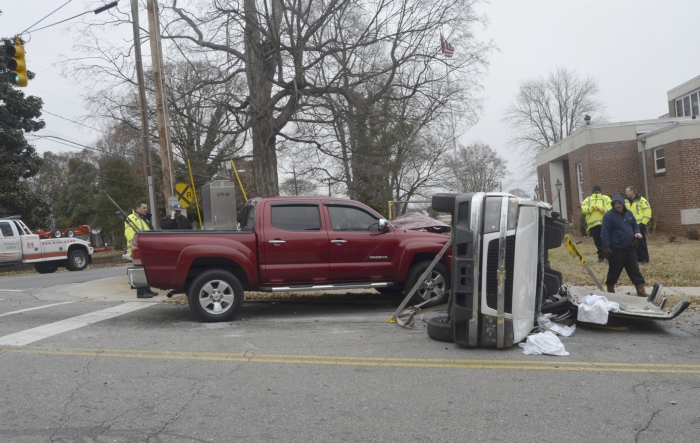 Salisbury Police and fire personnel responded to a two-vehicle collision at the intersection of West Kerr and North Fulton streets. The driver of the red Toyota Tacoma failed to stop at a red light and T-boned this Chevrolet Silverado. The roof of the white pickup had to be cut in order to remove the driver, who was temporarily trapped inside. The driver did not have serious injuries, officials said. Shavonne Walker/Salisbury Post

One person was taken to the hospital Monday morning following a two-vehicle collision at the intersection of West Kerr and North Fulton streets. The crash occurred around 10 a.m.

A woman traveling northeast on North Fulton Street in a red Toyota Tacoma pickup failed to stop at a red light there and T-boned a white Chevrolet Silverado heading southeast on West Kerr Street. Salisbury Police Officer Matt Benjamin said the driver of the Toyota, Enma N. Pleitez, 35, was charged with not having an operator’s license and failing to stop at a red light.

Pleitez was inside the pickup with her 10-month-old daughter. Benjamin said they were either heading to or from a doctor’s office appointment. They were not injured. The infant was correctly fastened into a child safety seat. The Toyota pickup did sustain some front end damage.

The driver of the other pickup, Nina Ridenhour, 65, also of Salisbury, was traveling with her 23-year-old grandson, Robbie Shehan, inside the Chevrolet. Ridehour’s pickup hit a curb, and the pickup overturned on the driver’s side.

Ridenhour was temporarily trapped inside the truck. Fire personnel had to cut the roof of the Chevrolet pickup in order to free the driver from the vehicle. Benjamin said Ridenhour’s seatbelt was the only thing holding her in the vehicle.

Benjamin said Ridenhour was alert, but shaken. She was taken to the hospital with injuries that were not serious.

Salisbury Fire Battalion Chief Tim Hurlocker said firefighters had to stabilize Ridenhour’s vehicle in order remove her from the Chevrolet pickup. He said the driver complained of injuries and was taken to the hospital via Rowan EMS.

Rowan County Rescue Squad also responded to the scene. Both vehicles were towed from the scene.