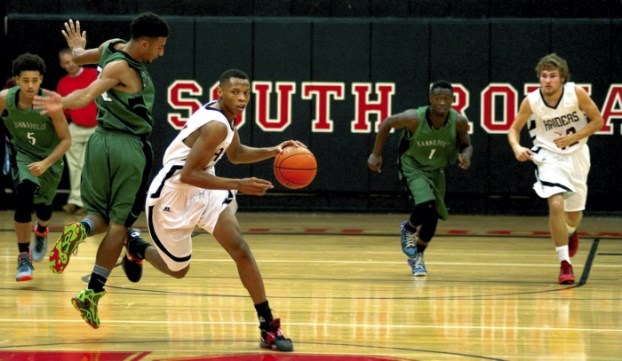 LANDIS — How can a varsity boys basketball team score under 40 points in game played at a furious pace?

Well, South Rowan provided the recipe in Monday’s 55-39 home loss to A.L. Brown. The ball just wouldn’t go in the hole for the Raiders from anywhere. They didn’t make a 3-pointer until Lavon Hill swished one in during the final minute.

Withers’ team is still playing without star guard Qwan Rhyne (hand), but he expected his team to be charged up to take on a rival.

“Kannapolis is coming to your place — you have to be up for that,” Withers said. “But it looked like we were moving in quicksand. There are going to be nights when you don’t shoot the ball well. You have to fight through those nights, and we just didn’t do a very good job of fighting.”

A.L. Brown (2-2) didn’t exactly light it up, but the Wonders were somewhat better and somewhat luckier than the Raiders (1-4). They made six 3-pointers, including two that were banked in by  football QB Damon Johnson, who scored 17 points.

“I was just happy those shots went in,” Johnson said with a laugh.  “Those shots were a little bit lucky, but I was proud of our team effort. We played very hard on defense and we were able to frustrate them some.”

South Rowan’s student section was declared a winner over its counterparts. When the Wonders got off to a fast start, A.L. Brown students chanted “Just like football.” When South Rowan students retaliated with “Where’s the bell?” — a reference to the Wonders’ third straight loss to Concord in their annual football showdown — Wonder supporters were temporarily stunned.

Hill has been outstanding for the Raiders so far — he scored 75 points in three losses last week — but he got his second foul for tripping and his third foul for a technical when he objected to the call late in the first quarter. Fueled by a pair of Jaylon Neal 3-pointers, the Wonders led 19-9 after eight minutes.

Hill sat the entire second quarter, but instead of being blown out, South Rowan clawed back in the game on drives by Tireek Wilder and Tyler Rary and hustle on the boards by Alec Stewart and Eric Finger.

Both coaches agreed South Rowan was in pretty good shape, down only 28-23 at halftime, but the opening moments of the second half proved decisive. Johnson made an athletic steal for an easy two and then he threw down a dunk for a nine-point lead. When A.L. Brown point guard Joekeem Neal squirmed into the paint for two more, the Wonders were back in front by 11.

Jaylon Neal provided a backbreaker 3-pointer after Joekeem Neal, his cousin, penetrated and kicked out. That shot made it 48-32 with 5:43 left.

South Rowan would only score five field goals in the second half. It was 53-32 before Hill finally made a drought-ending free throw with two minutes left. South went eight minutes without scoring between a three-point play by Stewart and the free throws by Hill.

“Hill is a heck of a player,” Klutz said. “But our guys inside did a pretty good job on him. Even when he got the ball down low, they  contested his shots.”

SALISBURY — It’s too soon to take the Salisbury boys basketball team’s temperature, but things are heating up on Lincolnton... read more