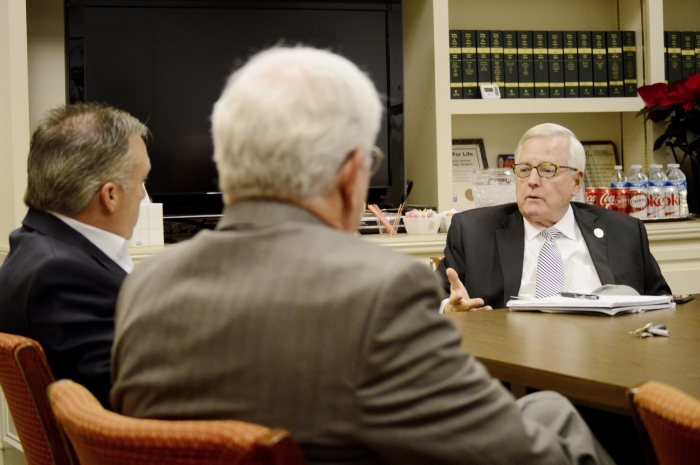 Top city officials met with new county leaders on Monday to discuss zoning for the former Salisbury Mall after a denied special use permit and months of worry about a potential downtown exodus.

Both Edds and Greene said they left feeling positive about working with the city to find a solution to the zoning issue.

“They’re willing to open their arms to us, and we’re willing to have a meeting of the minds, but there’s just so many technicalities about it that, even though their planning board already approved it, what we had offered the first time, we’ve got to back and do it all over again,” Greene said after Monday’s meeting ended. “It’s just a matter of working through these issues. We had a good meeting of the minds today, trying to be helpful for both sides.”

Edds said the county didn’t leave the meeting with a specific idea about how to proceed, but said he and Greene would talk to a group of county employees and other commissioners before making a firm decision about the future of the mall’s zoning.

Not much was different about Monday’s proposal when compared to the previously denied special use permit. During the meeting, Edds said the biggest difference was commissioners reaching out in good faith and offering to build trust between the city and county, which was a significant campaign issue in 2014.

In Monday’s meeting, Edds re-emphasized the county presently only needs 40,000 square feet for government services of the mall’s 320,000 square feet. It was a concession first offered by County Attorney Jay Dees and Planning Director Ed Muire during the hearing for a special use permit.

The hearing lasted multiple days and the final vote was 4-1 against the special use permit, with Councilman Brian Miller as the lone vote in favor of the request. After the denial, city officials proposed that the county submit a conditional district overlay.

Woodson said he preferred the conditional district overlay because it allowed City Council members to share opinions and talk openly with county officials during the process.

“It ties your hands behind your back,” Woodson said about the special use permit process. “I like to be able to pick up the phone and call my planning person. … We didn’t have that ability. You’re so restricted on what you can talk about.”

Sofley said there wouldn’t be a significant difference in the time needed to pass a special use permit or conditional district overlay. Woodson even proposed having a special called City Council meeting to consider a future county request. If called, it would likely be the only item on the agenda.

Blackwell and Woodson on Monday also brought up a previous concern — that the mall would be used as a tool to empty out downtown.

“Obviously, when you’re a City Council, one of our biggest challenges is keeping our downtown healthy,” Woodson said. “I think that’s true for every city in America. If they die out, it really kills the core of your city. It put a little fear in us and put us on edge.”

Edds addressed the concerns by quelling any beliefs that the mall would be used as a downtown exodus weapon.

“In my mind at least, the mall has nothing to do with that,” Edds said. “This is something that’s addressing needs the county has in a time when budgets and finances are tight.”

He also said the county voted to continue the special use permit appeal to keep its options open.

Near the end of the meeting, Woodson and Blackwell hinted that they might vote in favor of a proposal that limited the total amount of government space in the former Salisbury Mall if it came up again.

“We don’t have the three votes yet,” Woodson said. “We need three votes, so we’ve got to round up another vote somewhere, but I think our council will look at this as ya’ll coming to us in great faith and meeting with us and asking can we work with ya’ll. … I look at this as a new beginning.”