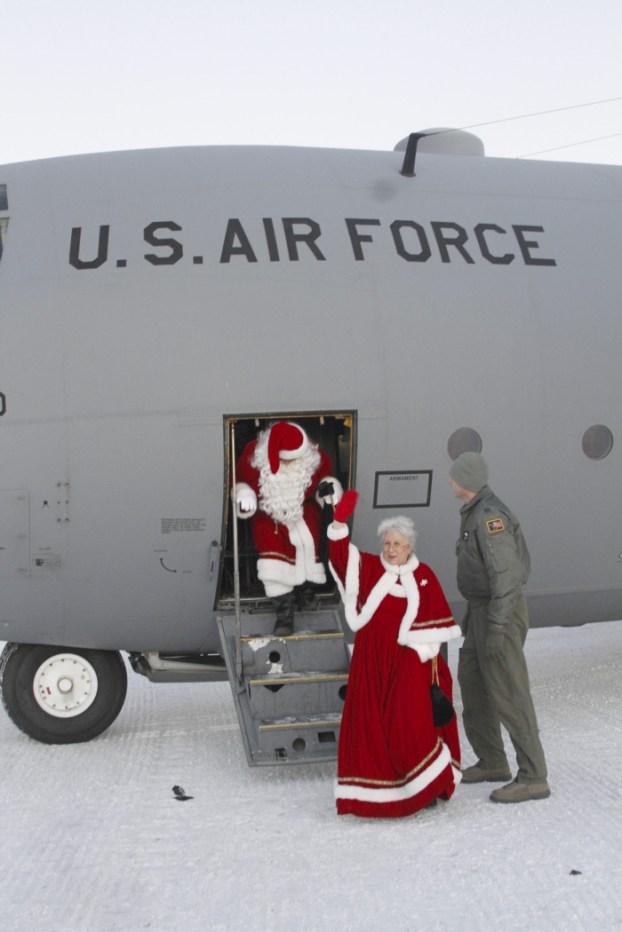 This photo taken Dec. 6, 2014, shows Santa and Mrs. Claus getting off a C130 military transport plane in Shishmaref, Alaska. The Alaska National Guard provided transport for the good Samaritan program Operation Santa, which took gifts and schools supplies to about 300 children in the Inupiat Eskimo community. (AP Photo/Mark Thiessen)

The White House moves to insure the safety of embassies and other U.S. interests worldwide ahead of the release of the document, which addresses the harsh interrogation of al-Qaida detainees.

The outgoing defense secretary is meeting with Iraqi officials and U.S. commanders to discuss the fight against the Islamic State group.

Activists in the California liberal bastion are demonstrating against grand jury decisions in Ferguson and New York’s chokehold death case.

4. HOW CONGRESS IS SPENDING TIME BEFORE HOLIDAY RECESS

Lawmakers are seeking to complete a $1.1 trillion bill that would keep the government running through Sept. 30, 2015.

A South African prosecutor is appealing the culpable homicide verdict that the double-amputee athlete received in October saying the judge erred in her interpretation of the law.

6. SOMBER NOTE FOR WILL AND KATE’S ROYALS US VISIT

The royal couple will visit the 9/11 Memorial and Museum after attending a basketball game Monday night in New York.

Two years after the massacre, no one’s in a hurry to erect a memorial. Instead, the focus is on making sure it’s done right.

A vice president for the Asian carrier resigned amid mounting criticism that she delayed a New York-Seoul flight over how nuts were served in first class.

9. WHERE SANTA IS VISITING WITH THE HELP OF VOLUNTEERS

LeBron James and Kevin Garnett showed their support for chokehold victim Eric Garner by wearing the T-shirts while they warmed up for the Cavaliers-Nets game.

Rowan weather: Watch out for that wind

Another cold, damp morning should become a partly sunny day with a high near 52. Winds from the northwest at... read more