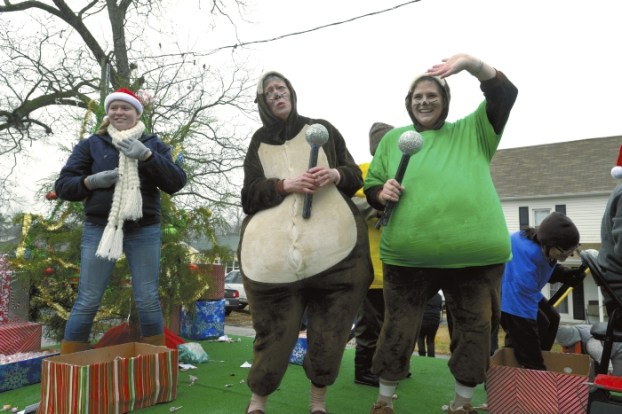 Employees from Cleveland Drug enjoy their ride in the 43rd Annual Cleveland Christmas Parade was held in the drizzling rain. photo by Wayne Hinshaw, for the Salisbury Post

Instead of sheltering rain some umbrellas were used to catch treats thrown to the crowd.

The parade has been an annual event since 1972 and has been held in all kinds of weather, from sunny and hot one year to rain showers or snowflakes in another. Rain or shine, the show must and does go on.

The parade has always had a hometown feel, showcasing local folks and activities, and Saturday’s parade was no different. Previous parade attendance has been estimated between 2,000 and 3,000 spectators, mostly Cleveland, Woodleaf, and Mount Ulla residents; however ,we estimated this year’s attendance to be sparse.

The parade stepped off at 2 p.m. from the old YMCA building (now the HUB) and traveled west toward U.S. 70 and Freightliner with the grand marshal, West Rowan JROTC and Rowan County Sheriff  leading the way.

Our parade still allows horses (which were positioned behind the marching entries), and we still allow candy to be tossed, so there was plenty to be had by the young and not-so-young spectators. Santa, on top of one of the Cleveland Fire Department’s fire trucks, brought up the rear.

A special thank-you to all the entries and spectators for another wonderful parade and supporting the Cleveland Lions Club.  A big thanks to our judges, who are selected from the spectators as it gives the community an opportunity to be involved.

Our judges this year were: Grand Marshall Chris Headley, Lions District Governor 2014-2015, of Monroe;  Joanna Cole of Lexington; and Gary and Robin McLaughlin of Mooresville.

Sharing the Season: Collaboration from community helps Communities in Schools