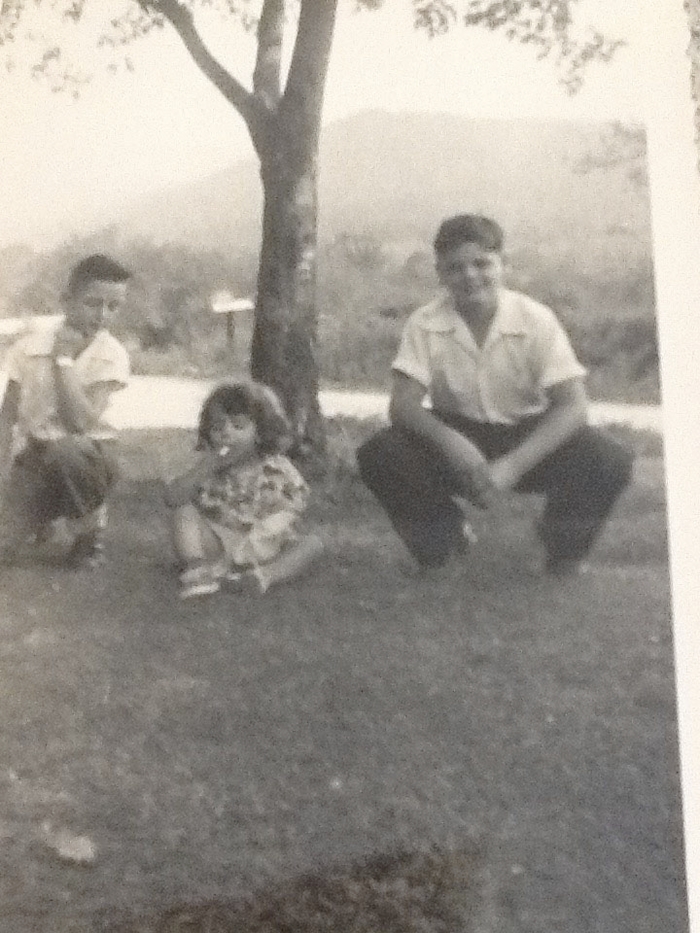 SUBMITTED PHOTO A young Mack Williams, center, pretends to take a drag off a cigarette while his older brother Joe, right, and cousin Troy, left, look on.

Although I was never a heavy smoker, my tobacco history goes back quite a while, as you can see by the accompanying photograph. This old black-and-white picture was snapped in the front yard of my aunt Laudis’ (we called her Lotus) home in McGrady, Wilkes County, N.C. (in the pristine air of the Appalachian foothills).

I’m being a little facetious, as I’m pretty sure (maybe) the cigarette upon which I’m apparently “taking a drag” was unlit. (Using a magnifying glass, I can’t detect any wisps of smoke.)

To my left is my teenaged brother Joe, about age 14 or 15, since I look to be about age 4 or 5. (Just like the number system, my brother and I are based on 10.) To my right is my first cousin Troy Lee Absher. Instead of one or the other, there is the greater likelihood that both of them should be listed in the “credits” for this scene.

My brother appears to be having a good time, while my cousin has a sort of wary look. I don’t know if his wariness applies to the whole situation, or if he is just wary of me.

As to my hair, this was pre-first haircut, a trimming which looks to have been long overdue.

I have no memory of this myself, only going on what my mother told me in later years (and of course, the picture). It wasn’t a candy cigarette, but the real thing.

If taken nowadays, such a photograph would probably be included as evidence in a Children’s Services investigation.

As a small child, I also remember being fascinated by candy cigarettes, especially the “glowing,” cold, red-dyed end (most likely toxic, too).

My next, most personal contact with a real cigarette was in high school, enjoying the mentholated dizziness from an inhaled Salem 100 on lunch break while working at Ray’s Kingburger on East Innes.

One morning at an East Rowan assembly, we were shown laminated, preserved examples of the sliced tissues of dead smokers’ lungs, a grim study in pathology for such an early hour.

I took a crooked (not crime) turn about that time in the direction of cigars, namely the rum-soaked “Spanish Maid Crooks.” I guess this was only natural, since my father was “multi-lingual” in his tobacco use, including cigarette, cigar and pipe.

I bought some “Crooks” again at Boone Drug while in college at Appalachian. These “curvy” cigars seemed special, with their allusion to Spanish “maids,” but it was more than just an allusion as far as being rum-soaked was concerned.

The removing of the foil wrapper exposed a cigar seemingly still moist with rum, a treat for taste, smell, and the tactile sense of the skin of my lips.

While puffing, I pictured the hand-wrapping of my cigar in a Mediterranean clime (in actuality, Pennsylvania).

I never got into chewing tobacco, but my son Jeremy likes Swedish “Snus.” His Great-Grandmother Williams enjoyed snuff, her dipping stick fashioned from a twig from her back yard fig tree.

I quit smoking a few times over the years utilizing two types of cigarettes which seemed to me to be designed to help smokers quit: “Doral” and “Vantage.” Doral had a hole in its filter, perhaps to let more air in to dilute the smoke. I considered both brands to be the nearest thing to smoking air. (The “smoking” of air is pretty hard to give up too, its cessation being best postponed for as long as possible.)

My cigarette smoking finally came to an abrupt end about eight years ago during a bout with sinusitis. Each inhaled bit of smoke made my sinus-drainage throat more raw, leading to pain’s negative stimulus succeeding where cigarettes whose filters resembled Swiss cheese had failed.

At long last, my much-practiced imitation of that “smoking robot” in Mr. Peck’s biology class was over.